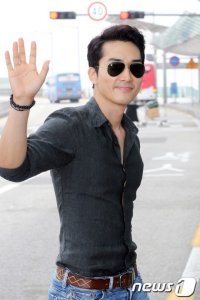 Actor Song Seung-heon has visited Japan to attend the "Hot Fantasy Odaiba 2006-2007" hosted by Fuji TV. He was greeted by some 5,000 Japanese fans when he arrived at Narita International Airport on Tuesday afternoon.

Speechless for a moment when he saw the crowd of fans, Song waved at them with smile a before leaving the airport quietly. Reporters from China and Hong Kong as well as Korea and Japan were present to cover him.

Some fans cried upon seeing the actor, and others loudly cheered him. "It is the first time that I have ever seen him in person, and I just felt like crying to think of him in the drama 'Autumn in my Heart'," Humiko Nakashima (48) from Osaka said. "I hope he keeps up the good work".

The great number of fans who turned out at the airport is further evidence that shows how popular Song is in Japan. His official Japanese fan club has some 10,000 members.

Song will return to Korea on Thursday.