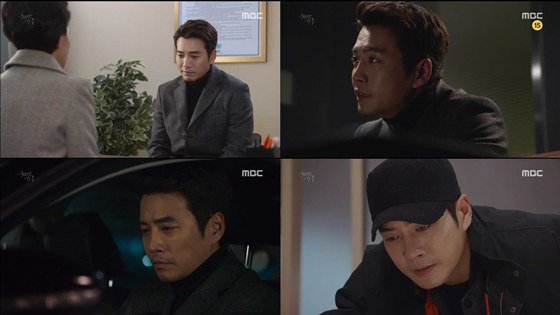 On the 21st, Jin Hyeong-woo went back to Sin Eun-soo (Choi Kang-hee) after he ran away from the investigators thanks to Kang Il-joo (Cha Ye-ryun). Hyeong-woo seemed to be on the verge of giving up as he told Han Yeong-ae (Na Young-hee) to give up the fight but when Il-joo told him Eun-soo was looking for him he ran away from the interrogation room and went to see Eun-soo.

Yeong-ae asked why he was being like this over a girl and Hyeong-woo said, "She is the one who told me why I should live and how I should live". He also determined to get revenge on Seok-hyeon who was the cause of everything. Even when Seok-hyeon said Eun-soo doesn't care for him, Hyeong-woo said he won't forget her even if he died.

Hyeong-woo only had eyes for Eun-soo in the darkest of situations. He touched the paper plane that was his way of telling Eun-soo how he felt about her when they were young while watching her leave with Seok-hyeon.

"[Spoiler] "Glamorous Temptation" Joo Sang-wook's passionate love "
by HanCinema is licensed under a Creative Commons Attribution-Share Alike 3.0 Unported License.
Based on a work from this source