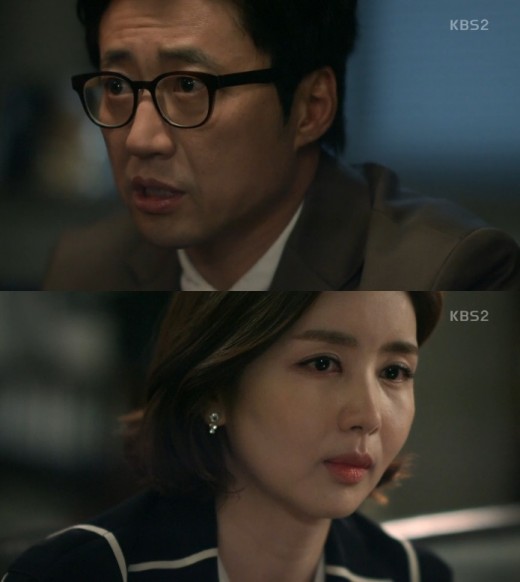 The episode 12 of KBS 2TV's Monday & Tuesday drama showed the ardent feeling towards each other by Jang Haekyeong (Park Sol-mi) and Jo Deul-ho (Park Shin-yang) even after their divorce.

On this day, Hae-kyeong became worried about Jo Deul-ho as he had been confronting Chairman Jeong (Jung Won-joong). Hae-kyeong went to see Deul-ho and told him, "Can't you take care of yourself, please? I sensed something strange is going on with Chairman Jeong's side. It seems that they are about to do something crazy. What is going on?".

Deul-ho said, "Do you think I had started all of this without that much determination? Didn't I promise you? I'll be alive at least until Soo-bin is getting married. Don't worry. I'll keep my promise".

He also said, "Thank you for your concerns, but you need to eat more. You're too thin". Hae-kyeong's heart was touched by his words.

"[Spoiler] 'Neighborhood Lawyer Jo Deul-ho' Park Shin-yang and Park Sol-mi are still ardent for each other"
by HanCinema is licensed under a Creative Commons Attribution-Share Alike 3.0 Unported License.
Based on a work from this source