Starlets in Hot Water Over Ignorance of History 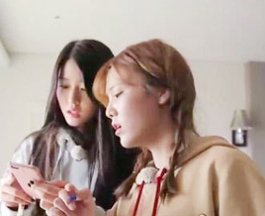 Seolhyun and Jimin of girl group AOA have become targets of ridicule over their apparent lack of knowledge of Korean history.

The two starlets were asked about historical figures on a reality show on cable channel Onstyle were unable to identify Ahn Jung-geun, a famous independence fighter.

The two were shown photos of 20 famous people, and while they had no problems identifying soccer player Park Ji-sung, actor Brad Pitt and Apple founder Steve Jobs, they were stumped when it came to historical figures.

Even with prompting the two did not manage to identify Ahn.

Their poor performance duly went viral, and patriots and educators alike were foaming at the mouth. Irate netizens demanded that Seolhyun be fired as promotional ambassador for Korean tourism, a role she is meant to play until 2018.

On Friday, 10 days after the debacle, the two starlets apologized. "I deeply regret not displaying a sincere attitude regarding Korea's history", Jimin said, while Seolhyun in a statement said she "learned that ignorance is the biggest mistake".

The girls' agency apparently begged producers to cut the offending segment, but they decided to give the two girls the rope to hang themselves. It has now been deleted.

Talent mills typically subject their manufactured groups to a grueling regime of singing and dancing lessons but rarely pick members on the basis of their deep engagement with the higher pursuits.

"Starlets in Hot Water Over Ignorance of History"
by HanCinema is licensed under a Creative Commons Attribution-Share Alike 3.0 Unported License.
Based on a work from this source