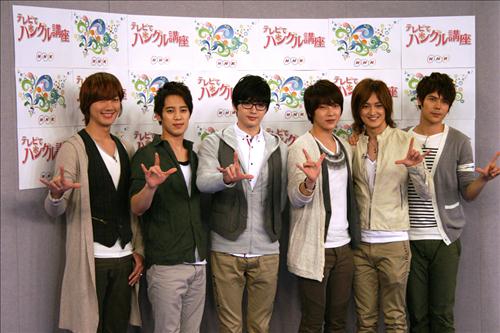 Six member star group Supernova will appear on a Korean lecture program on NHK to instruct viewers in the Korean language in Japan. Members of Supernova participated in the press conference for the program entitled "Korean Language Class on TV" held at the headquarter of NHK located in Shibuya, Tokyo on February 22. They informed viewers that they would appear in the Korean language class, which will air its first episode of a total of 48 episodes on March 29, by taking turns and teach mostly frequently-used Korean expressions.

The leader of the group, Jung Yoon-hak said, "I have wanted to teach the Korean language from the time when I studied in Japan". Yoon Sungmo expressed his feelings, saying, "I am very glad that we can appear in an educational program". Gunil said, "It will be our first time speaking in Korean on a Japanese TV program, so I feel really nervous". Kwangsoo gave advice for learning the Korean language by saying, "People might be able to use Korean expressions while travelling in Korea by practicing Korean expressions very often to acquire those expressions". In addition, each member taught their favorite Korean expression by giving an explanation of its meaning.

"Supernova to Teach Korean on NHK's Korean Lecture"
by HanCinema is licensed under a Creative Commons Attribution-Share Alike 3.0 Unported License.
Based on a work from this source