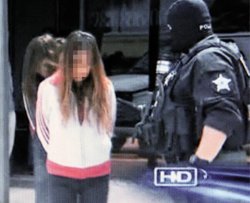 In this TV image grab, police arrest sex workers in Harris County in Houston, Texas in early May. /Courtesy of ABC 13.

Harris County in Houston, Texas has declared war on Korean brothels, seeking to stamp out prostitution and other illegal activity. The county on Wednesday submitted a petition to a local court seeking to close down three massage parlors and one night club run by Koreans.

According to the Houston Chronicle, Harris County wrote in the petition that the proprietors "use young women, mostly from Korea, to perform services". County officials are seeking a court order to shut them down for one year.

It is rare for a U.S. county to single out a particular establishment for closure, but there had been constant complaints from local residents. "According to a news release from Harris County Attorney Vince Ryan's office, hundreds of calls for service have been made to law enforcement agencies since 2009 resulting in 57 investigations", the paper said. A police raid on the massage parlors resulted in the arrests of seven sex workers, six of them Korean.

City officials in Los Angeles, Atlanta and New Jersey, which have large Korean populations, are also having a hard time trying to deal with Korean brothels. The situation is the same in Australia, Japan and other countries.

Late last year, the Washington Post said there were more than 80 Asian women in the northern Virginia region engaged in prostitution, most of them Korean. It said they come to the U.S. in search of a new life, but most of them cannot escape the shackles of prostitution.

"Texas County Declares War on Korean Brothels"
by HanCinema is licensed under a Creative Commons Attribution-Share Alike 3.0 Unported License.
Based on a work from this source