"The Battleship Island" VS "A Taxi Driver"

It is a clean cut. How much courtesy has been put into the movie, how truthful historical facts have been drawn and how clear is the viewpoint of the generation? Finally, 'authenticity' wins.

The fates of the directors of "The Battleship Island" and "A Taxi Driver" are staggering.

"The Battleship Island", which started its box office race with a dare in the forefront of the high season summer market, entered the road of self-destruction within a week. As a latecomer, "A Taxi Driver" is going to fill all the gaps. "A Taxi Driver" met the expectation of 120%, but the "The Battleship Island" became the protagonist beyond contradiction and reversal.

In terms of box office rankings, as well as advance rates and seat occupancy, "A Taxi Driver" dominates in all aspects. In the meantime, "The Battleship Island" fund, which was invested 23 billion won in production costs, has to hit the breakeven point of 700 ~ 8 million people, but popularity failed with a surge of 6 million. The primary target was lowered to the break-even point, not exceeding 10 million. 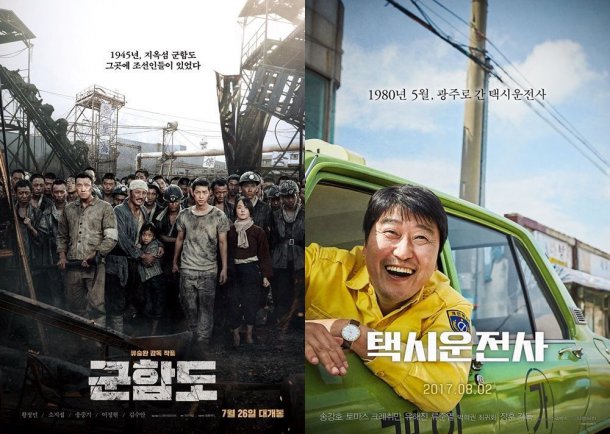 "A Taxi Driver" had a seat occupancy rate of 71.1% on the 5th and maintains a 60% advance rate on the 6th. It is overwhelmingly unmatched. It has been racing to win the race by drawing in the spectators who are disappointed in the "The Battleship Island". If the main power continues, then "The Admiral: Roaring Currents" just may be outnumbered.

What they have in common is that they have dealt with sensitive and sensitive historical truths that cannot be talked about in contemporary history, though the times are different. Through the medium of film, we have the same purpose and meaning to tell the truth to the whole world.

As soon as it was opened, "The Battleship Island" was caught up in irritating controversies such as history distortion and colonialism. Ryoo Seung-wan's explanation was rather poison rather than persuasion. Whatever the intention is, if the audience cannot accept it, it is a failure to deliver. Even if the "The Battleship Island" succeeds, the team should figure out why they have won only half the support.

The taxi driver who enjoyed the rebound did not have anything to enhance the movie fun, but it focused on the truth based on tension. It was also a strong point that there was no exaggeration and difficulty. If the 'taxi driver' succeeded in breaking the 10 million mark, it would be in the top three along with "The Attorney" and "The Admiral: Roaring Currents".

""The Battleship Island" VS "A Taxi Driver""
by HanCinema is licensed under a Creative Commons Attribution-Share Alike 3.0 Unported License.
Based on a work from this source