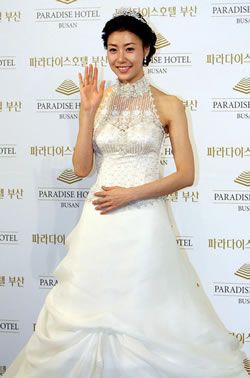 Actress Sung Hyun-ah tied the knot with businessman Heo Eun-gyo at the Paradise Hotel in Busan on Sunday. The wedding was held behind closed doors out of respect for the bridegroom and his family who did not want media exposure.

At a press conference before the wedding, the 32-year-old actress shyly expressed her hope to have a baby as soon as possible since she has married quite late. Around 1,000 guests including actress Kim Jung-eun and composer Joo Young-hoon attended the wedding.

Moving into acting after winning the Miss Korea pageant in 1994, Seong has appeared in several TV dramas such as "Can't Take My Eyes Off You", and "The Way of Medicine: The Epic Doctor Hur Jun" ("Heo Jun") and films such as "The Scarlet Letter", and "Woman is the Future of Man" and "Time". She currently plays Princess Hwawan in the MBC drama "Yi San".

Actress Sung Hyun-ah poses at a press conference before her wedding at the Paradise Hotel in Busan on Sunday. She tied the knot with businessman Heo Eun-gyo, who is one year younger than her./Yonhap