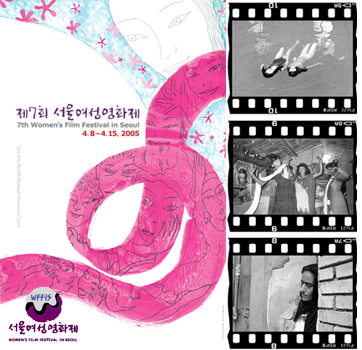 On the festival's opening day, well-known international award-winning women directors including Lucretia Martel of Argentina, Anna Luif of Sweden and Celesta Davis from the U.S., will arrive in Seoul at the same time.

Lucretia Martel, whose "The Holy Girl" will be featured at the opening ceremony this year, won the the Alfred Bauer prize for her debut film "La Cienaga" at the Berlin International Film Festival in 2001.

Meanwhile during the festival, U.S. film director Celesta Davis will show her controversial movie "Awful Normal", in which she dramatizes her own personal experience of being raped. In 2004, she received the Best Feature Documentary Prize at the Cinequest Film Festival in San Francisco and a Special Jury Prize at the Florida Film Festival for this film.

In addition, Carole Laure, a former Canadian movie star and singer who became a film director, will make a visit to Korea with her film "CQ2" on April 8. And Israeli journalist and movie director Anat Zuria will bring her film "Sentenced to Marriage" on April 10.