'CGV LA' to Open in Hollywood 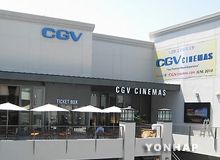 A movie theater screening Korean films exclusively will open in Hollywood in the U.S. city of Los Angeles.

CJ CGV, the largest theater chain in South Korea, said Monday that "CGV LA" will open in Los Angeles on Friday. The theater will have the capacity to accommodate 600 moviegoers.

Ahead of its opening, CGV LA will hold this week a special preview of Korean films new to local theaters including "Blades of Blood" and "Secret Reunion".

CGV plans to align its screening of Korean films with the films' screening in South Korea and will introduce various new Korean short films.