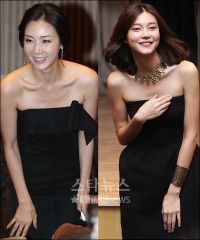 Hot actresses Choi Ji-woo and Cha Ye-ryun have been at the special drama press conference for "Celebrity's Sweetheart".

Here, they have appeared in a black tube dresses! Don't they look hot?

But who do you think is hotter?

This drama starring the two actresses is about a popular Asia's star who is prejudiced against men and a down to earth college student.

The first episode is aired on Deceomber 10th!

"[ChanMi's take Choi Ji-woo vs Cha Ye-ryun! Who looks better in a black tube dress?"
by HanCinema is licensed under a Creative Commons Attribution-Share Alike 3.0 Unported License.
Based on a work from this source