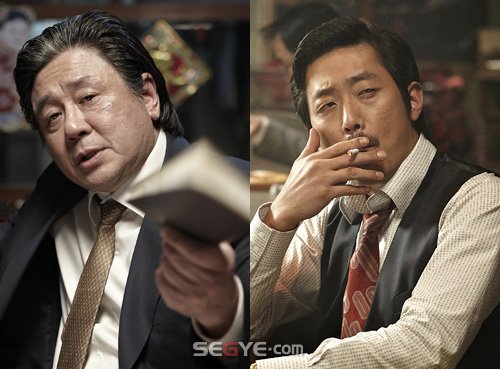 Actor Choi Min-sik and Ha Jung-woo are going to meet through a gangster crime movie.

According to Show Box Mediaplex, "Nameless Gangster", about bad people fighting over each other to become the nest in Busan in the 90's is going to be released on the 2nd of February.

Choi Min-sik and Ha Jung-woo are to act together in this movie and this already brings lots of interest.

Ha Jung-woo plays the role of Choi Hyeong-bae, the young boss of the greatest gang in Busan also known as 'number one fist' and Choi Min-sik is Choi In-hyeok who tries to take over this gang and become the number one in Busan.

The blood and loyalty of bad guy's during the 1980's to the 1990's in Busan will be shown through this movie. The movie is directed by Yoon Jong-bin from "The Moonlight of Seoul".

"Choi Min-sik declares "Crime and War" to Ha Jung-woo?"
by HanCinema is licensed under a Creative Commons Attribution-Share Alike 3.0 Unported License.
Based on a work from this source