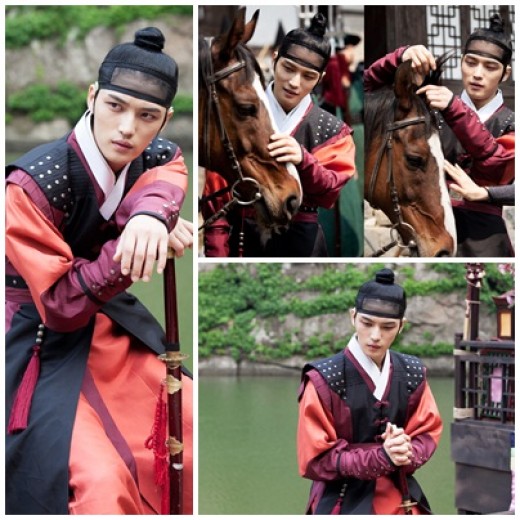 Behind cuts of Kim Jae-joong who plays the role of Kim Kyeong-tak in the MBC weekend drama "Dr. JIN" were revealed on the 6th..

Enjoying a break time on site, Kim Jae-joong was caught on camera. He is holding a sword that he always has on him in the drama but his aura is unusual and all the female staff couldn't take their eyes off him.

With Kim Kyeong-tak's specialty being martial arts, Kim Jae-joong is on a horse more often than the other cast. Maybe that being so why, the way he touches a horse is quite natural. He brushed the horses hair and played around with the horse like the regular Kim Jae-joong. Everyone on site couldn't help but laugh at his mischievous act.

Kim Jae-joong is going through a lot for the reason that he is the child of a concubine but he is actually very popular amongst other staff and crew members for being so caring and hard working style. He also entertains the people around him sometimes with his random out breaks.

""Dr. JIN" Kim Jae-joong fooling around behind stage"
by HanCinema is licensed under a Creative Commons Attribution-Share Alike 3.0 Unported License.
Based on a work from this source