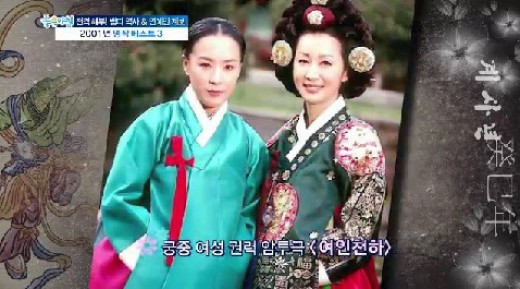 Dramas "My Lady, My Queen", "Piano" and movie "Friend" have been chosen as the best in the Year of the Snake 2001.

SBS TV program "Good Morning" highlighted those stars born in the Year of the Snake and also introduced 3 dramas that are considered the best in the year 2001.

SBS drama "My Lady, My Queen" is the life story of Jeong Nan-jeong who was born by a concubine and had to live life against the world.

Jeon In-hwa who was Queen Moon-jeong back then, said, "There were so many lines to memorize. I used to repeat my lines sleeping or not sleeping and it would just be saved in my head I would say it without realizing it".

"Friend" is the third to be on the line. It broke through 7 million viewers and created the 'gangster syndrome'. It also created many slang and provoked the air or men.

"Dramas of 2001, "My Lady My Queen", "Piano", movie "Friend""
by HanCinema is licensed under a Creative Commons Attribution-Share Alike 3.0 Unported License.
Based on a work from this source