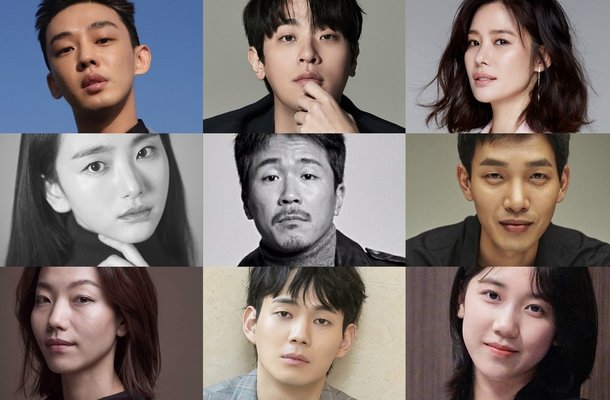 "Hellbound" is about humans facing a supernatural phenomenon that is neither a miracle nor a curse. To live through this unrealistic reality, these humans create hell. The casts include Yoo Ah-in, Park Jung-min, Kim Hyun-joo, Won Jin-ah, Yang Ik-june, Kim Do-yoon-I, Kim Shin-rok, Ryu Kyung-soo and Lee Re.

Yoo Ah-in returns with another strong character following "#ALIVE", "Burning", "The Throne" and "Veteran". He takes on the role of Chairman Jung Jin-soo, the head of the New Truth Society, an emerging religion that explains that the phenomenon of the Death Angel's visit is a sign of God. He is expected to express strong charisma and mysteriousness at the same time.

Park Jung-min from "Time to Hunt", "Start-Up" and "Svaha: The Sixth Finger" is expected to play the role of Bae Yeong-jae, a producer of a broadcasting station that delves into the truth of the New Truth Society.

Kim Hyun-joo who starred in her first genre series in OCN's "WATCHER", plays the role of lawyer Min Hye-jin, who stands up to the behavior of the new Truth Society and the group that blindly follows them.

In addition to having made a reputation for himself with the film "Breathless", director Yang Ik-june is also an actor who starred in "Bad Guys : Vile City" and "It's Okay, That's Love". He takes on the role of detective Jin Kyeong-hoon who investigates the appearance of the Death Angel from hell in "Hellbound".

Actor Kim Do-yoon-I from "The Cursed" and "Peninsula" has maintained his strong friendship with director Yeon Sang-ho and takes on the role of a madman as a member of the cult.

Kim Shin-rok, who made a strong impression with his shocking shamanistic performance in "The Cursed", will play the role of Park Jeong-ja, a mother who was suddenly sentenced to hell in front of her young children, in detail what the ordinary person in the changed world will go through.

Ryu Kyung-soo, who showed his irreplaceable presence by drawing favorable reviews for his strong performances in the dramas "Confession - Drama" and "Itaewon Class", plays the role of a priest who thinks and acts only for the revival of the New Truth Society.

Lee Re, who has shown her presence in movies "Hope" and "A Melody to Remember" and has been active in producer Yeon Sang-ho's work "Peninsula" will appear as Jin Hee-jeong, the daughter of detective Jin Kyeong-hoon, and will work with Yang Ik-june.

The original webtoon "Hellbound" which is currently being highly praised on Naver, is being illustrated by Choi Kyu-sok, the writer of "Awl" and the screenplay is by director Yeon Sang-ho, drawing keen attention by penetrating into the uncertainty and absurdity of modern society.

Netflix's original series "Hellbound" is being directed and screenplay by Yeon Sang-ho, producer of "Peninsula" and "Train to Busan" and co-written by Choi Kyu-sok, author of "Awl". Following the drama "The Cursed", Lezhin Studio, which is making Netflix's original series "D.P" is being in charge, and expectations are rising even more with the addition of solid actors.