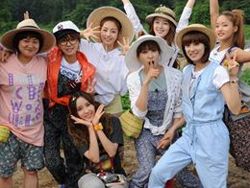 These days, girl groups are duking it out in terms of how beautiful their natural, bare faces are. Whereas before, netizens would have to go digging around for makeup-free shots of their favorite female idol stars, these days, stars are uploading such shots on their own accord. This can be taken as a sign of the girls' confidence in their natural beauty.

Take the ladies of SISTAR for example. They uploaded videos of themselves practicing dance routines with makeup-free, bare faces onto their homepage. This video of course spread to major video sites such as You Tube.

Another group that is quite proud of their untouched physical charm is 4minute. They're known as the group where none of its members have undergone plastic surgery; a rarity in this day and age. They've also currently created much buzz over a recent commercial shooting. It appears as if the girls don't have any makeup on in it.

What caused this change in attitude towards bare faces Well, many attribute it to sexy queen, Lee Hyori who appeared on the very popular variety program "Family Outing". In it, viewers were able to see her morning after morning, looking slightly puffy without a drop of makeup on. Rather than ruining her image though, Lee was able to garner much love for being so real.

It's not just on air though. Stars are taking to their facebook and twitter accounts by posting up shots of themselves au naturel.

To make it in this cutthroat industry, it's not all about stage presence, music, makeup, and attire anymore. Add on another criteria: how beautiful is your natural beauty