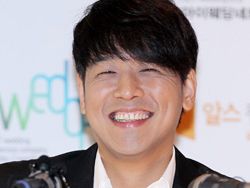 Hallyu star Ryu Si-won caught everyone off guard on October 6th, by announcing his upcoming wedding plans and the news of a baby on the way. The star plans to wed his non-celebrity girlfriend -- a dance major that was introduced to Ryoo through a mutual friend last year -- on the 26th of this month at the Seoul Grand Hyatt Hotel. The baby will be born soon after during spring of next year.
Whereas such an event would've catapulted into a media frenzy a few years back, the public is hardly lifting an eyebrow over Ryoo's news. This is because more and more stars are mixing up the conventional order of wedding first, baby after sequence.?

Take the ever-so-popular Jang-Ko couple. Jang Dong-gun's wife Ko So-young gave birth to the couple's first child on October 4th. Go was already five months pregnant when the couple said their vows last May. Arguably one of the most famous and best looking couples in k-pop, the public has been referring to their child, "the baby of the century".

Example number two is Lee Seong-gyoon and Jeon Hye-jin-II who tied the knot after six years of dating last May. Lee had proudly announced the news of the five-week old baby in Jeon's stomach, clarifying that the baby was not the reason for the "unexpected" wedding. Lee said, "We [Hye-jin and I] could've claimed that the baby was a honeymoon baby, but I felt that it was my duty as a husband to be honest so that Hye-jin could go to the hospital freely and comfortably".

Going back a little further in time to the beginning of this year, actor Jo Han-sun got hitched to his girlfriend who was already 13-weeks pregnant. He became the proud father of a son this past April, just three months after his wedding. Some of the hottest bachelor stars such as Gang Dong-won and Song Seung-heon expressed their congratulatory messages and even slight envy over Jo.?

Rewinding back to 2008 now, one of the most popular bachelor stars, kwon Sang-woo married actress Son Tae-young in September. At the time of their wedding announcement, the couple actually didn't reveal the fact that Son was already expecting. Kwon later confessed that he was indeed to become a father, and explained that he didn't announce Son's pregnancy earlier in fear of people assuming that it was a shotgun wedding.

It's not only the actors demonstrating this trend, but singers too. Frontman of Epik High, Tablo and his wife Kang Hye-jung became happy parents just seven months after their wedding in October of 2009. Kang was already about three months into her pregnancy when the couple announced their wedding plans along with the news of their future daughter?

A few other examples include actress Oh Seung-eun who was already six months pregnant when she married basketball player Im Hyo-sung, former SES member Shoo (Yoo Soo-young) who got married in April of 2009 and gave birth to a son that following June, Kim Se-ah who announced that she was seven months pregnant a mere two months after her wedding, and Yoo Se-yoon who became a father just six months after he said his vows.