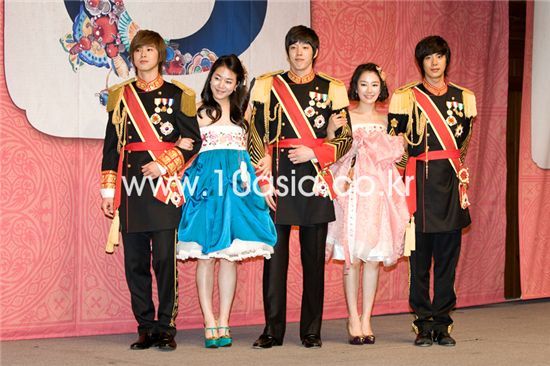 Comic series "Goong", whose TV adaptation had stirred close to two dozen countries throughout the world, is set on cooking up another Hallyu craze, this time with a musical production starring Jung Yu-ho better known as Yunho Yunho of Korean boy band TVXQ.

At a press conference held Wednesday afternoon at Seoul's Imperial Palace, the entire cast of the show including the pop idol singer, as well as director Kim Jae-sung and producer Song Byung-joon, spoke to reporters about the new production.

"We had been preparing this for several years, going through many ups and downs, and even asking a couple others to produce the show", said Song, the chief art director for the musical version of "Goong". "But eventually we decided that we knew the drama 'Goong' and the original comics best so we decided to produce it ourselves".

Song is the founder of production company Creative Leaders Group 8 and the creative mastermind behind hit TV dramas such as "Princess Hours" (MBC, 2006) and "Boys over Flowers" (KBS2, 2009),

He seemed particularly happy to have re-united with noted director Hwang In-roi, whom he worked with on the 1993 hit musical "Save the Last Dance for Me" where Song served as his music director. Hwang had also helmed the small screen adaptation of "Princess Hours" in 2006.

When asked why he chose Yunho Yunho to play the male lead, he answered that it was because of the singer's "fame throughout Asia" as well as his exceptional singing and dancing skills.

Yunho Yunho started by thanking his overseas fans for showing interest in the musical, acknowledging a small excited group of Japanese fans, who won the opportunity to attend the Seoul press conference. They stood up on their chairs to take pictures of the leader of Tohoshinki, as TVXQ is called in Japan.

In response to why he chose to take on the challenge of doing a musical, he answered, "I always want to work hard in everything but having the dancing, singing and acting all come together and being able to deliver various emotions such as joy, anger, sorrow and happiness were a huge point of attraction for me".

He also mentioned his bandmate Xiah Junsu's recent musical turn, saying "I heard that Junsu pulled off his character well and I think it's great. I too want to work hard and show you a good performance".

When told he has the perfect look to play the main character Lee Shin, a royal prince, the singer explained that he dreams of breaking free from his pop idol image as Yunho Yunho and being someone else, such as playing the soccer player Cha Bong-goon in MBC TV series "No Limit".

"Goong" is a story about an average high-school girl marrying a royal prince in 21st century Korea, which is in fiction a monarchical country. The best-selling comic series was adapted for the small screen in 2006 and became a huge hit that turned its two lead actors, Yoon Eun-hye and Ju Ji-hoon, into household names.

The drama, which scored viewership ratings of over 30 percent during its run, was sold to 23 countries including China, Japan, Saudi Arabia, Taiwan and the U.S. and created a Hallyu craze among fans, particularly in Asia.

According to Park Rae-hyun, a PR & Promotion manager for Group 8, the musical version is vying for a similar ripple effect throughout the region.

Park explained that the company is planning to bring in fans from Japan and other Asian countries to see the show, particularly for performances starring Yunho Yunho, as well as taking the gig overseas for foreign audiences.

Musical "Goong" will run at the National Museum of Korea from September 8 to October 24.

""Goong" set on rekindling Hallyu fever with musical adaptation"
by HanCinema is licensed under a Creative Commons Attribution-Share Alike 3.0 Unported License.
Based on a work from this source