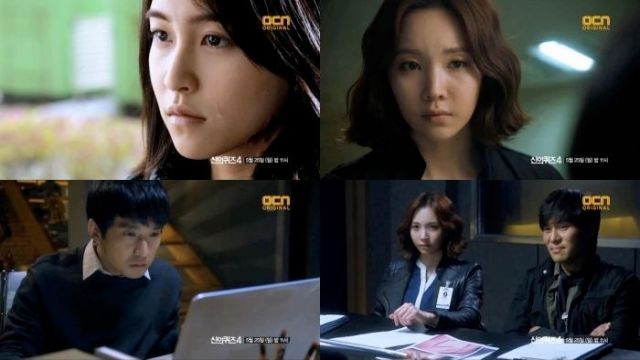 The drama continues with more angst about storyline events that happened between seasons involving characters I don't really know anything about. And that's the last I'm ever mentioning that. It's probably clear by now that the fourth season is probably not the ideal starting point for this drama. I'd just be repeating everything from the last review if I wanted to get into why this episode doesn't work, and that feels rather pointless.

So let's get into the objective strong points. The production values are excellent. Pay attention to lighting and the use of shadows. Characters are only very rarely fully illuminated. We constantly see them almost in profile, almost like we really understand everything that's going on. But then the shadows plunge them into darkness and it's difficult to say with much certainty how reliable any of these people are. About the only place this doesn't happen is outside- and not coincidentally, the outdoors scenes also tend to be the most optimistic.

This isn't just a matter of obviously evil characters. Outside of the main characters, the criminal investigation involves lots of fury over an unexpected death. The anger and guilt clearly overwhelms these characters, so that they're not particularly reliable witnesses, even for events they might have seen firsthand. As a result the main detective story here is surprisingly well-grounded in reality, even as it relies on melodramatic elements.

The investigation phase is a stark contrast to earlier in the episode, where there's lots of discussion of forensic science in regard to figuring out exactly what happened. Then we get to a greater conflict of how even science is having difficulty in the face of actual people whose motives aren't always that well-grounded. The characters involved in this week's invesigation do a good job representing the amibiguity of this greater divide.

This might be a useful parallel for whatever's going on in the main plot involving the detectives. Unfortunately, as mentioned, I'm not sure whether Jin-woo's reactions are supposed to be reasonable or not. Tentatively I'm assuming the answer to that is no- the other characters certainly give him enough grief about not letting the whole saving his life thing go. But I'm not sure how evil the evil guy is supposed to be. In any case, the main case here is fairly well-defined, and does a lot to make the episode go down well regardless of how much knowledge you may have regarding the detectives who make up the actual cast.