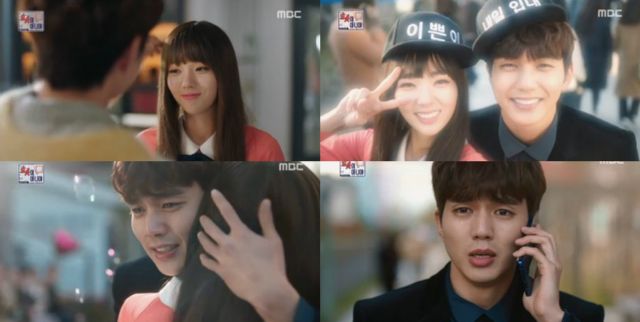 So upon further consideration I really don't like Ri-el. Granted, Ri-iel doesn't have much more screentime here than she did last time, but I see now that this is more a factor of her personality than it is the screenwriting. Ri-el is just a very curt, unsentimental person by nature. After what happened last time she saw Min-gyoo, I'm a little dumbfounded that the first words out of her mouth here weren't hey, are you OK, because last time we met you looked like you were about to die.

Incidentally, I am extremely suspicious of Doctor Oh (played by Uhm Hyo-sup). He surely must know that Min-gyoo's illness is psychosomatic. Where does a small child even find a doctor for an exotic disease like that when he doesn't have a legal guardian? Even assuming Doctor Oh just wasn't smart enough to figure this out on his own, Min-gyoo's brief reprieve from symptoms hints at an obvious cure that should have been attempted years ago.

Once the meeting with Ri-el is over, by the way, that's all episode nine is about, is just Min-gyoo dancing around being happy. It's moments like this that it's hard to hate him. Observe how in his gleeful state, Min-gyoo is no longer a skinflint about money. There are still practical problems to his being a good boyfriend, the most obvious being that Min-gyoo believes Ji-ah is a robot when other people just think she's a cute girl in weird clothes, but the previously easily rattled Min-gyoo is now cool and confident.

Baek-gyoon, not so much. Episode ten is all about his meltdown. I like how, technical genius notwithstanding, Baek-gyoon is still an idiot when it comes to financial matters. In his emotional fury Baek-gyoon appears to have forgotten that the entire reason why his team is running an elaborate con job on Min-gyoo is because they have no other options for potential investors. And besides that, if AZ3's purpose is not to provide companionship, why did he design her to look like a cute girl?

Lost in the shuffle here is how Ji-ah feels about ongoing events. Which appropriately enough is also reflected in Ji-ah's solo scenes. Baek-gyoon apparently blames Ji-ah for encouraging Min-gyoo, and predictably failed to realize the potential negative consequences of abandoning her in public in AZ3's outfit. I like how stupid behavior on the part of the male leads here is prompted by hubris. They're not so different after all.

"[HanCinema's Drama Review] "I'm Not a Robot" Episodes 9-10"
by HanCinema is licensed under a Creative Commons Attribution-Share Alike 3.0 Unported License.