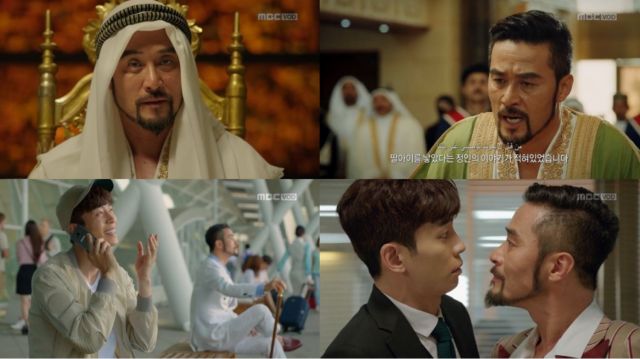 Count Said Faid Ali (played by Choi Min-soo) is The Sheik- not literally, but that's the character type he aspires to. Such clichés about the Middle East are more than a little antiquated. It's hard to escape the sheer cartoonishness of Count Said Faid Ali's supervillain palace, complete with sexy women in blasphemous swimsuits that couple headscarves with cleavage. By the end of the sandstorm it's pretty thoroughly established that Count Said Faid Ali is from a pretty weird world.

...But actually, Count Said Faid Ali is from Korea. Once that's explained, we move into the world of Ho-rim (played by Shin Sung-rok), a nebbish bank employee. He struggles with trying to resign from the job that he hates, and can't even stand up to his wife Ji-yeong (played by Kang Ye-won) when she tries to take the family on an unwanted vacation. Take note, though, that Ho-rim never comes off as a particularly sympathetic.

This is because Ji-yeong has her own set of problems. She longs to show more of the world to her daughter Eun-bi (played by Ko Bi-joo), because Ji-yeong's family had no money growing up on account of her having an absentee dad. An absentee dad who might, indeed, be Count Said Faid Ali. And that's where "Man Who Dies to Live" is taking us. It's throwing all these disparate characters at us and each other as we wait for that powder keg to inevitably go off.

The sheer ethnic nature of "Man Who Dies to Live" is the main standout quality. The drama borrows tropes from a wide variety of sources, making it a simultaneous look into a large number of Korean stereotypes have about foreign cultures. The unnamed Middle Eastern kingdom Count Said Faid Ali is from is the obvious example. But there's also how Count Said Faid Ali interacts with Westerners. Then there's Ji-yeong's beliefs about the value of travel, the visuals of the scenes at the oriental medicine clinic where she works. There's even a character who sneakily watches anime during working hours.

All of these factors combine to make "Man Who Dies to Live", at minimum, quite distinctive. However, I must confess that as of yet, the drama is really more weird than it is genuinely funny. Although I suppose the more important factor is just that it's interesting. The premise is well exposited and explained, and the characters are already a pretty diverse mix of positive and negative traits. That's something, at least.