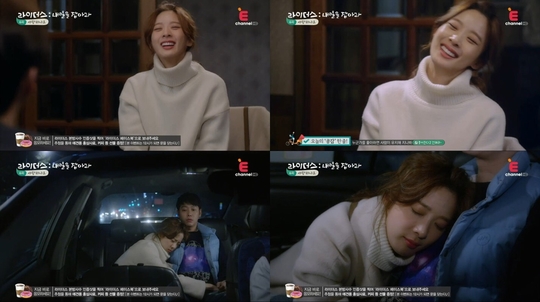 At this point I think the actual plot of "Riders: Get Tomorrow" really is just the various loveline entanglements. Which is unfortunate because there's still the same constant generally creepy element of how Gi-joon is trying to date So-dam without actually dating her. The whole incident with the rings should have been a wake-up call to Gi-joon that he really needs to stop acting like this. Instead, he contrives a complicated excuse to take her to a movie by claiming it as research. That movie is "Take This Waltz", in case you were wondering.

Aside from that, very little happens this episode, and this is getting to be a recurring theme. "Riders: Get Tomorrow" has a plot, but writer Park Sang-hee deliberately avoids exploring this plot for the sake of generally weak character interactions that lack much urgency. The result is a drama that isn't terribly memorable, nor does the story seem to have much of an obvious point.

The cliffhanger is a good illustration of this, because I realized at that point to my shock that I actually care more about what happens to the rickshaws themselves than what happens to any of the individual characters. Part of this is because the rickshaw scenes, when they happen to show up, tend to involve a lot of energy. It also helps that the characters look genuinely happy when they ride the rickshaws, even though this is technically work.

Indeed, for character arcs that's pretty much all Tae-ra does this episode. She briefly sulks about being asked by Yoon-jae to help out with their rickshaw emergency. But then Tae-ra realizes that riding a bike and feeling the wind in her air is in fact the one big thing that's been missing from her life. Sure she can go to the gym, and enjoy the stares of all the other guys on the treadmills. Although really, does that actually qualify as fun compared to wiggling her butt in the driver's seat?

I really wish "Riders: Get Tomorrow" would do a better harnassing its energy in a more constructive way, moving in a straight line without major deviations. Which weirdly enough is kind of the whole point of a rickshaw in the first place- a fact Gi-joon is consistently incapable of grasping. Even his weak-willed romance very nearly goes somewhere only for Gi-joon to be distracted by another subplot. I mean sheesh, this meandering would almost qualify as self-parody if it wasn't so very annoying.