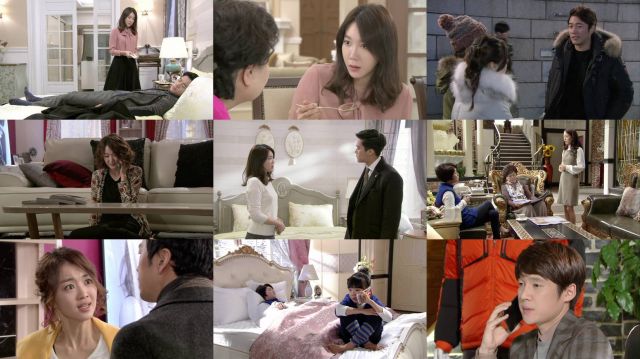 This episode falls into a weird kind of limbo where even though lots of important stuff is happening...it somehow feels like nothing is happening at all. Almost the entire conflict here is about Da-mi and her unwillingness to sever with Joon-goo. And for one hour she just repeatedly refuses to do that, to the increasing agitation of every character around her. Such would seem to be the wages of carrying on with a married man.

Unfortunately, we just don't know all that much about Da-mi. Yes, she's had a few times to explain her position, but just because I know where the woman's coming from doesn't mean that I particularly care. Her tenaciousness here isn't particularly admirable, given the general circumstances, and actress Jang Hee-jin simply doesn't do a very good job selling the desperation. Granted, part of this is because Da-mi has to expend a lot of effort just saving face. But again, that on its own does not make for compelling television.

Other storylines moves slowly and steadily, though we are getting into an annoying bit of repetition. Eun-soo is still agonizing over the problems in her love life, and she continues to deal with these issues in her usual passive aggressive self destructive way. It's actually a somewhat interesting parallel to what's going on with Da-mi- but it's not one I noticed while actually watching the drama, mainly because Da-mi's problems take up far more screentime.

Likewise, there's another minor conflict in the Jeong household, as we continue to see Chae Rin not having any idea what to do with her stepdaughter. In this case I can actually forgive the poor sympathetic focus- Chae Rin herself is almost entirely obsessed with Tae-won, and seems to have trouble grasping the fact that Tae-won's life almost completely revolves around Seul-gi. This is one of the many problems with this relationship that as yet has no clear solution.

The ideas are all fine in "She Gets Married Thrice", it's just the execution that gets lackluster sometimes. It's easy enough to process the events of this episode- there's just nothing that exciting about the way they're presented. Ironically, the preview for next one is a veritable smorgasbord of extreme, exciting events with an intensity that demands attention. I can only hope that the story ends up living up to the billing. This episode wasn't a terrible one- just lethargic enough that it's difficult to keep everything at full attention.

"[HanCinema's Drama Review] "She Gets Married Thrice" Episode 18"
by HanCinema is licensed under a Creative Commons Attribution-Share Alike 3.0 Unported License.