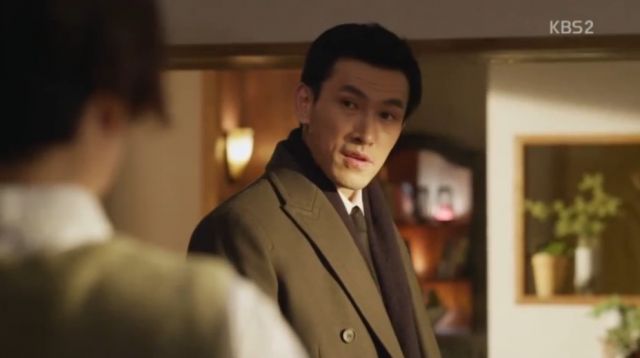 Gi-cheol (played masterfully by Yoo Oh-sung) is exactly the bolt of energy "Spy - Drama" needed. From the man's very first confrontation with Hye-rim, it's obvious that Gi-cheol means business. Gi-cheol knows that he's operating from a superior ethical and tactical position, and milks these advantages for all they're worth. The man's just so deliciously smug- he even manages to make the old facial deformity trope feel fresh.

Then it's back to Seon-woo and his less-than-inspiring adventures in the spy world- in other words, the same general blandness that permeated the first episode. I wonder whether Seon-woo and his associates are supposed to come off as less-than-super-competent here, and if this is a deliberate contrast to the way Gi-cheol does business. If so I can only hope that these two meet each other soon. I don't even care in what capacity. Yoo Oh-sung just brings such incredible glory to every scene he's in.

Yoon-jin (played by Ko Sung-hee) may be an extension of this. What little we see of Gi-cheol in flashback tells us that even way back when, the man was not one to give in to empathy. By contrast, Seon-woo the spy mostly just wants to live a normal everyday life, and it seems likely that if not for his mother's checkered past this may well have been easily accomplished. One fact that remains unclear is how deep Hye-rim's lies go. Does her family even know she's North Korean? How could they not, given the way Hye-rim's decorated their home?

"Spy - Drama" is still suffering some problems in terms of character empathy. Even when the story evolves to necessitating the use of a terror bomb, I'm less worried about Hye-rim and her family as I am impatiently waiting for Yoo Oh-sung to come back on-screen and force the plot into a new, exciting direction based solely on the sheer strength of his personality.

Seriously, this is some of the best casting I've seen in quite some time. And part of the reason for that is that Yoo Oh-sung isn't upstaging anyone. Even the fight with Hye-rim is as much psychological as it is physical, and an obvious reflection of the fact that he knows all the rules while Hye-rim has to do what she can with her limited residual memory. "Spy - Drama" definitely has potential from this point on. The question is whether it will be able to deliver on it. For the moment, I'm fairly optimistic.