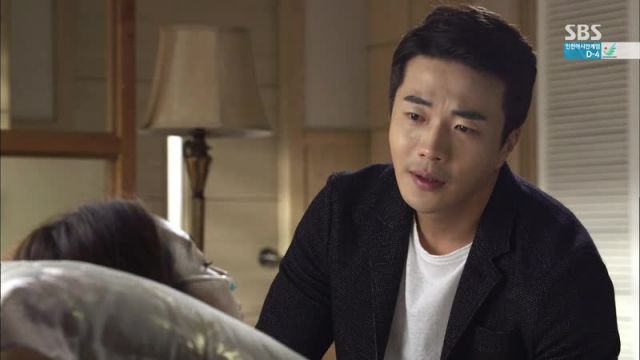 "Temptation"'s penultimate episode sketched the paths the characters are going to traverse at the end after all the trials and tribulations of the show. Three of the four main leads can now look back with perfect hindsight 20/20 vision and see their roles in causing the havoc that befell their lives. It doesn't completely dispel the bitterness, but it does give some sense of viewer satisfaction to see the growth. The other person, Min-woo, remains selfish to the end, a true villain of the story in which he imagined himself the hero.

Min-woo's ego rules his life and thus far, he has run relatively unchecked. His love for Hong-joo, as said before, is more a love for his concept of Hong-joo as a pure woman he needs to protect, a woman who is the opposite of the viperous and driven Ji-seon. It is this episode that we finally see her treat her as a possession, and it's both vile and satisfying. Satisfying because he reveals his true self to Hong-joo and to the audience - he is no longer shrouded by his smirk and his ego. And he is also no longer protected by his money. Hong-gyu wrenched his sister away from the selfish Min-woo and there was nothing he could do. Again, very satisfying

.Hong-gyu's character is not quite as satisfying. He is wonderful in how protective he is of his sister, and he is very much a young man in how he handles her issues with such hot-headedness. But the writers have done little to address his romance with Se-jin and how that plays into the the fabric of the plot. Both Hong-gyu and Se-jin are deep, feeling people who deserved more screen time than they got. They only have one episode to give them enlightenment and resolution, which is not enough and a severe writing oversight. Another such oversight is the relationship between Se-young and her father. He is still in the dark about her illness, as are most people, and everyone will have to deal with it in the last hour of the show. There will be a lot of badly timed revelations in the final episode should the writer choose to address them.

Seok-hoon has always been the true hero of the story, the kindly man who made a mistake. While he is truly kind, it is a bit disconcerting to watch him love Se-jin with little to no remorse for what happened between him and Hong-joo. He jumped into his new romance and hasn't looked back. Yes, it falls into line with his character, but morally, its unsatisfying.

On the moral front, it is Hong-joo who has made the biggest turnaround. She erred and, although it took a long time, she saw the error of her ways and took responsibility for them. She isn't perfect, but her journey to the dark side and back was one of the most powerful plotlines of the show. Se-young, too, has learned quite a bit, especially after her surgery. Mostly she has learned to revel in life more and less in the material. Her joy stemmed from pain, but she realizes the pain she caused, like Hong-joo.

Ji-seon has been a stagnant character in that she had so much potential to learn and grow and remained in the shadows of greed and conceit. It makes her perfect for the narcissistic Min-woo. Her children weren't enough of an impetus for her to change and live an honest life. Neither did her oldest daughter have a chance to develop. She was just the angry child who served as an instigator for Hong-joo. Roy, too. He has such a moving storyline that was cut and left by the wayside.

The finale could go many ways, but it will definitely address the relationship between Se-young and Hong-joo and try to tie up the many, many open ends it has left. Which ones it chooses to work with remains a mystery, but hopefully "Temptation" will arrive at some sort of satisfactory end.