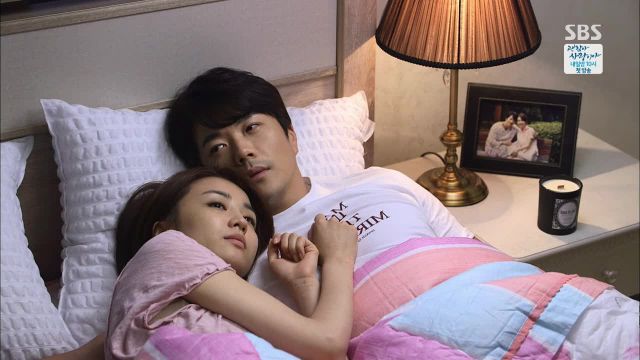 Episode 4 of "Temptation" was cyclical. It mirrored episode 3's events in reverse and sported more manipulation and betrayal. The small feelings that were planted have started to grow insidiously like weeds and are affecting decisions. It is a distinct lack of communication that is causing the breakdown of what once were solid relationships and promoting the growth of unhealthy ones.

Seok-hoon and Hong-joo are the main victims of a lack of communication. Each omits the truth to avoid the other's anger, and avoid their feelings. The omissions snowball into outright lies, and the real betrayal begins as lies build upon lies. It is the little things that will break this relationship. If Se-young and Min-woo were no longer involved, the young couple would have a chance to reconcile. Instead, the constant intervention prevents them from focusing on healing.

Seok-hoon is sinking fast. He is inexplicably drawn to Se-young and neglecting Hong-joo because of it. His situation is interesting because Se-young is not only an attractive woman, but she has the power to "save" him from his financial crisis. He postures about not wanting to work for her, but he's slowly caving and opening up to her. Unlike Se-young, he is a man experienced in love and romantic relationships and does know what is happening - he chooses to continue to associate with her anyway. That is his downfall.

The same holds true for Hong-joo. She knows that babysitting Roy is dangerous. Children is a hot topic between her and Seok-hoon because she has miscarried and knows they need medical help to carry to term. Involving herself with Roy, and by proxy, his father Min-woo, is like stepping into an emotional minefield. Like Seok-hoon, she is weakened by what happened in Hong Kong and needing the emotional comfort. Children are a huge comfort in times of duress. She also agrees to friendship with Min-woo, which she knows is not smart. Again, she knows better, but can't seem to help herself.

Minor characters have risen to prominence this week, like Min-woo's suspicious wife, Han Ji-sun (Yoon Ah-jung). Ji-sun knows he's an unfaithful husband and has had him trailed. She has discovered his son, and that he's with another woman. It drags the ignorant Hong-joo into their marital problems and will definitely make life more difficult for innocent little Roy. Ji-sun is an interesting character because she is currently bitter and unlikeable, but it is because Min-woo's mother blames her for having only daughter's instead of a son. It is an immense pressure that has calloused her.

Two siblings, Se-young's sister and Han-joo's brother, have met and are going to be a romantic pairing/obstacle for the main characters in the future. It is a pairing like this that makes me think this world is a bit too small and a bit too full of coincidences. But it is to up the angst factor, which is a key melodramatic component.

The instrumental music in this show is badly mastered and overpowering. It is dramatic to the point of being cheesy. It breaks the mood of the more intense scenes by taking over the scene rather than enhancing it.

"Temptation" needs to be careful in its execution from here on out. It could quickly spiral out of control, or continue to develop the relationship dilemmas with aplomb. It is all up to the writer.