[HanCinema's Drama Review] "This Life Is Our First Life" Episode 8 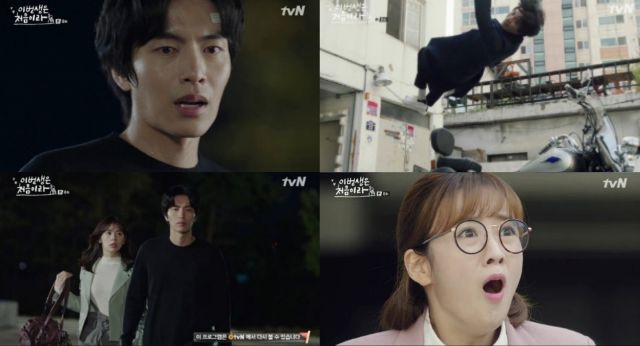 So it turns out that Bo-ram is evil. Well, technically we don't know that but those goofy evil musical cues that keep coming on every time he makes an appearance are difficult to interpret any other way. It's disappointing. Bo-ram's you only live once philosophy is a very interesting contrast to Se-hee's logical work ethic. I wouldn't have minded him turning out to be evil eventually, but the completion of his storyline abruptly kills the drama's most interesting ongoing conflict.

It doesn't help that Bo-ram's purpose in the story turned out to be so clichéd. What makes Se-hee an interesting character is that he views the world in a very unique logical way. In that context, I was looking forward to the inevitable moment when he starts considering that Ji-ho is more significant than just a fake wife. Instead, she ends up being a damsel in distress. Again, it's disappointing. Ji-ho, like Se-hee, has more interesting character traits than that.

Note how throughout this episode Ji-ho consistently viewed Bo-ram's actions in an obviously cautious manner. To go from that to Ji-ho agreeing to go on a motorcyle ride with him to the middle of nowhere was rather out of character for a woman who we have otherwise seen to be extremely intelligent. It was only the ambivalence of Ji-ho's relationship with Se-hee that led Ji-ho to get closer to Bo-ram in the first place.

For all the other flaws in this storyline, that ambivalence remains extremely well-done. Se-hee realizes that he should warn Ji-ho about the suspicious report, but is concerned that his actions will come off as being jealousy, especially when Ji-ho responds to his alternative mild suggestions with the same cold commentary about the contractual nature of their relationship that he's told her time and again. There's also the matter of how a random report from the app is not necessarily proof of anything.

Personally, I was holding out hope that Bo-mi had contrived that report for the sole purpose of trying to provoke Ji-ho into jealousy, since she had already been needling him on that point. Alas, that kind of writing might have been too creative for this production team. I'm not expecting "This Life Is Our First Life" to be as brilliant going forward as it was for most of the first half, but I suspect that at minimum it will still be an engaging romantic comedy.

"[HanCinema's Drama Review] "This Life Is Our First Life" Episode 8"
by HanCinema is licensed under a Creative Commons Attribution-Share Alike 3.0 Unported License.