[HanCinema's Drama Review] "Yeah, That's How It Is" Episode 30 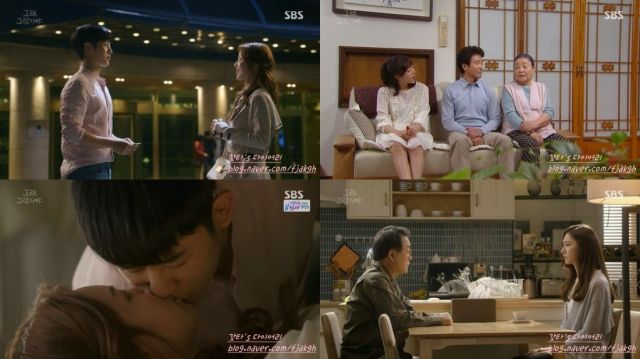 So an old kiss scene from "Yeah, That's How It Is" has been in the news lately, so I thought I'd check it out. This being episode thirty of a weekend drama, there's obviously a lot of context that I'm missing. "Yeah, That's How It Is" is an ensemble piece, and we don't actually get to see Se-joon (played by Jung Hae-in) or Na-yeong (played by Nam Gyu-ri) until about the nineteen minute point. But from that point on they're a constant fixture. The production team definitely recognized their excellent chemistry.

So anyway, Se-joon and Na-yeong have run off to Gyeongju together in about the most chaste way possible. Their hotel room has two beds. What makes their scenes so cute is that these two act incredibly childishly in such an obviously sultry environment. They're drinking soju on the floor, for pity's sake. Yet at every possible moment of romantic escalation, they keep holding back, as if terrified that someone is watching and will punish them.

These fears turn out to be well-founded. Apparently Se-joon and Na-yeong's families are very adamant that Se-joon and Na-yeong never be together. I actually liked not really knowing for sure what was going on here, because the cliffhanger involves Na-yeong's mom Tae-hee (played by Im Ye-jin) acting like a complete psycho in public while horrified bystanders look on. Yes, I can see why, with an upbringing like that, Na-yeong is simultaneously attracted to and terrified by Se-joon.

On the other hand Se-joon's mother Hye-kyeong (played by Kim Hae-sook) is remarkably chill, but that's probably because "Yeah, That's How It Is" keeps panning back to her and her friends hanging out and having a vacation together. Now those were some pretty jovial scenes. I'm kind of surprised we don't see more of those on television, considering how big a thing mom coalitions are in Korean culture, but then people enjoying themselves doesn't make for good drama.

Well, or at least not the kind of soap opera drama "Yeah, That's How It Is" is obviously in the business in. There are some very dark themes about long-term sickness and suicide thrown in here. Now those probably would work better with more context. But there's still plenty here that's easy to get. Like Lee Soon-jae, who does the same role he always does. The grumpy old guy who's not quite as grumpy as he allows other people to believe. He is really good at that role.

"Yeah, That's How It Is" is directed by Son Jeong-hyeon, written by Kim Su-hyun, and features Lee Soon-jae, Kang Bu-ja, Yang Hee-kyung, No Joo-hyun and Song Seung-hwan.

"[HanCinema's Drama Review] "Yeah, That's How It Is" Episode 30"
by HanCinema is licensed under a Creative Commons Attribution-Share Alike 3.0 Unported License.