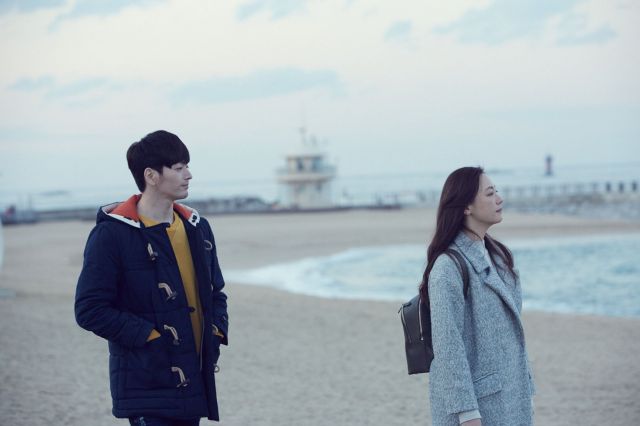 Jung-woo (played by Kim Sungje) is an actor. Since acting work is not generally reliable, Jung-woo works at his family guest house out on South Korea's northeastern coast. One day, Jung-woo's older sister Seon-woo (played by Baek Seon-woo) instructs Jung-woo to show Japanese tourist Hiroko (played by Chisun) around Gangreung, since Seon-woo is busy doing work related to the Pyeongchang Winter Olympics. Jung-woo is not the best tour guide, since he does not speak Japanese, and Hiroko does not speak Korean.

"Guest House" is at its most interesting when dealing with how Jung-woo and Hiroko's relationship develops through an obvious language barrier. While neither speaks good English, through constant interaction Jung-woo and Hiroko noticeably improve their English language skills as the movie progresses. That's some pretty great continuity, although it could just be effective sublety in the performances of the lead actors.

The actual plot to "Guest House" is not so strong, on account of it just being very light. While Jung-woo is initially very dedicated to the possibility of scoring a good acting job, as time goes by he seems to lose interest either in acting or his own storyline. The difference isn't terribly important, since the script, by the same measure, loses interest in Jung-woo's career prospects to instead focus on Hiroko and her motives for coming to Gangreung.

Hiroko actually has three completely different reasons for coming to Korea. First, Jiroko wants to look at possible real estate for her Korean grandmother, who hails from Gangreung. Hiroko always endearingly calls this person 할머니, one of the few Korean words she knows. Next, Hiroko is appearing for a Japanese broadcasting segment about Gangreung's Olympic facilities. Lastly, Hiroko is mulling over whether she wants to start curling again after an embarrassing scandal involving a Japanese national hockey team player.

The third reason is kept a secret for most of the movie. Which is a bit odd, because the climax centers around whether Hiroko is going to announce a career comeback. Granted, Hiroko telling Jung-woo about her uncomfortable backstory is a major step in their relationship, indicating that she trusts him. But that's no reason for "Guest House" to keep this information a secret from us, since up until we learn about Hiroko's most interesting character conflict the woman is a fairly bland cipher, whose main distinguishing character trait is a strong interest in Korean culture.

I would not call "Guest House" a particularly bad movie, it's just a fairly generic one that rests entirely on the awkward chemistry of the two lead actors. While Kim Sungje and Chisun are decently good in the roles, the scope of the subject matter is too limited to be of much special interest. "Guest House" doesn't even function well as a travelogue, since Jung-woo and Hiroko spend almost all of their time either at the guest house, restaurants, beaches, or just plain normal houses. There's just not much of visual interest here. Even curling metaphors arrive far too late to be of much help.