[HanCinema's Film Review] "Someone Behind You" 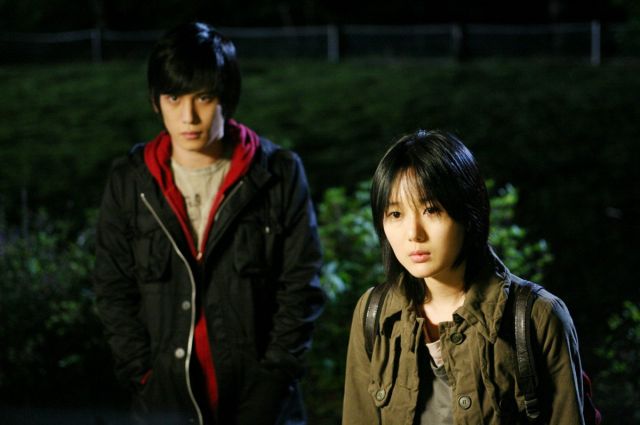 Ga-in (played by Yoon Jin-seo) is a likable high school student from a good family who's a crackerjack fencer. These combat skills prove helpful against the major supernatural threat in "Someone Behind You" although it's not quite what she's expecting. Sure, there are plenty of freaky hallucinations, but the reason why the movie is called "Someone Behind You" is because the real threat always ends up being one and only one person who's in the same room as Ga-in at any given time.

As a horror film, "Someone Behind You" relies a lot more on effective scares than it does on properly exposing the darkness of the human heart. Because regardless of motivation, most real-life murders are committed by people known to the victim. They come up in news stories as inexplicable crimes and indeed, early on one character is dismissive of the idea of a supernatural curse entirely because of all the twisted depraved crimes that happen on a daily basis without the assistance of a curse. The whole human race is cursed.

The final denouement isn't quite as convincing in this context as I would have preferred. The big speech made by the villain to the effect of how it's actually the people who commit the murder is a bit silly considering how trivial most of the "Real" motivations end up being. After a certain point Ga-in really should just be paranoid about being alone with any person at any time. Although in all fairness it's not like she's ever given that much advance notice. Which is pretty much how rash emotional reactions work anyway.

Consider anger in that context. All people get angry, but in general, we don't fear for our lives in the presence of an angry person because we trust that other people can keep themselves under control. When you think about it that's a pretty big leap of faith. Strangers, acquaintances, and even family members hold dark assumptions about you just the same as you make dark assumptions about them, and in order to maintain our sanity, we have to pretend like these significant personality conflicts are not that big a deal.

What makes "Someone Behind You" so effectively scary is that the movie imagines a world where such social fictions are nonexistent, and that anger can be overloaded to the point that long-term consequences don't even factor in the thought process. Ga-in herself is so non-confrontational that she accidentally makes the situation worse at multiple points. There are few insults greater than just being treated with insignificance.

Taken in full perspective the theming of "Someone Behind You" is actually quite strong, even if in immediate context the movie's conclusions about human nature may seem a little silly. Although really, the best reason to watch this movie is just for the sake of tension. By design, the scares come when Ga-in least expects it, if only because Ga-in struggles with whether or not to believe that she's about to get tossed into yet another near-death situation.

"[HanCinema's Film Review] "Someone Behind You""
by HanCinema is licensed under a Creative Commons Attribution-Share Alike 3.0 Unported License.