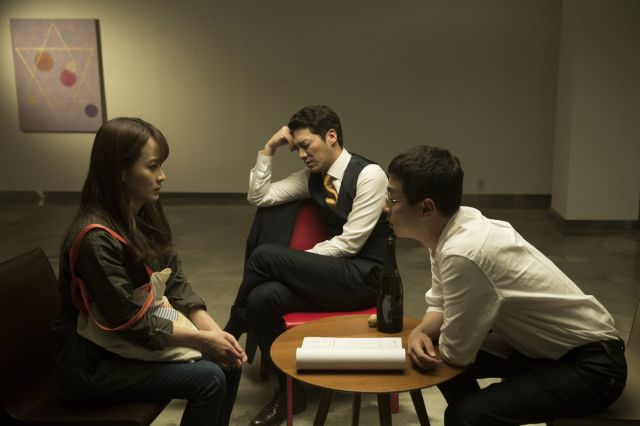 In-sook (played by Ryu Hyun-kyung) is an artist in her thirties who has returned to South Korea after a long stint in Denmark as "Gisele", a personality enamored with abstract compositions and also acting generally antisocial and unpleasant. No really, Gisele has this fantastic talent for sabotaging herself at every turn. First it's getting drunk and antagonizing the renowned art critic Joong-sik (played by Lee Soon-jae). Then it's getting drunk and belittling art dealer Jae-beom (played by Park Jung-min). You can perhaps see the pattern behind Gisele's failures in life.

But "The Artist: Reborn", aside from the obvious literal interpretation, is a movie that prides itself on imagining what art is and what, for that matter, is the point of the weird little nicknames artists create for themselves. The answer to that question is a bit more base than you're probably expecting. They want recognition. In-sook created Giselle because she thought a cool-sounding foreign name would attract attention. It didn't really work.

What does work is actually having confidence in the power of her artwork to interest people. Anyone who sees Gisele's artwork is clearly very sincerely impressed. All right, admittedly Jae-beom isn't really a good enough appraiser of art to really say anything more than "it's good", but that's pretty much where I was too. Gisele's artwork is very symmetrical and is constructed with very clean shapes in mind. I find it pleasing to look at. And that's pretty much it.

For In-sook, though, art is not something that exists to impress other people. It it supposed to be an expression of her individuality, her personal experience. That's what really brings In-sook down on a day-by-day basis. Observe the normal job interview In-sook has early on. A later scene makes it explicitly clear that, ironic though it may seem, In-sook really did want that job. It wasn't because she cared about the money, or the conformity. In-sook just likes being recognized.

Bear in mind that the grander artistic sentiments of "The Artist: Reborn" may take a moment to really settle in, since the rather raunchy first act consists of Gisele acting outrageously with such choice dialog as "what happened to all the pubic hair". Then there's the second act, where Jae-beom comes up with a plan so elaborate that its inevitable failure should have come off as obvious far, far sooner than it did. It's only the third act where In-sook's mentality starts to be taken seriously, and we have to reconcile Gisele's unpleasantness with Jae-beom's and wonder, which is the worse character?

I actually liked Jae-beom for quite awhile, since unlike Gisele, it's possible to have a mostly civil conversation with him. So I was all the more impressed with how director Kim Kyeong-won managed to subtly transition the story in such a way that allowed In-sook to reclaim her personal dignity even as Jae-beom seems to lose all comprehension of the term. "The Artist: Reborn" is quite a bit of fun, and definitely worth watching and thinking about.

"The Artist: Reborn" is directed by Kim Kyeong-won and features Ryu Hyun-kyung and Park Jung-min.