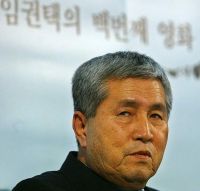 If you have already made 99 movies in your lengthy and diverse career, what kind of project would you choose to make for your 100th film? The question may sound unrealistic for most directors around the world; yet it's a real question for Im Kwon-taek.

Im has chosen to tackle the question head-on. For his landmark 100th piece, "Beyond the Years (Cheon-neon-hak)", he has returned to the old yet resonating theme of love and suffering. The new movie depicts life and its fleeting nature in a style that reflects Im's trademark meditative approach to life.

Local media swarmed the press preview venue on Tuesday afternoon, highlighting the significance of the latest movie made by the award-winning filmmaker. "For this movie, all the staff members and actors have devoted their full energy", Im told reporters.

The film is adapted from Lee Cheong-joon's novel "Seonhakdong nageunae" (The Wanderer of Seonhak-dong), and its pansori theme triggers its association with Im's "Seopyeonje" (1993), a story of traditional Korean pansori singers struggling to survive in the modern world. "Beyond the Years" extends the theme of the pansori singers, while exploring the long-forgotten traditional Korean value against backdrop of pristine countryside scenery. In the film, Song-hwa (Oh Jung-hae) has a brother named Dong-ho (Cho Jae-hyun), but they are not actually blood-related. Their father is pansori singer Yu-bong (Im Jin-taek), and the story revolves around the troubled relationship between Song-hwa and Dong-ho.

While "Seopyeongje" portrays the sublimation of Korean "han", or suffering through pansori singing, "Beyond the Years" sticks to the high-flying affection between a man and a woman.

Chung Il-sung, a longtime partner with director Im and cinematographer of "Beyond the Years" said much emphasis has been placed on the harmony between characters and nature in order to enhance the film's underlying theme.

Im, 71, is widely recognized as a master storyteller by the Korean film industry, and has a huge following, especially among actors and younger filmmakers. Since his debut in 1962 with "Farewell to the Duman River", he has been producing films like a factory at full capacity.

The massive number of films he has made is a record-setting drama itself, but what is also notable is Im's growing influence at the box office and at international festivals. In the early 1990s, he set new box-office records with his "Son of a General" series. "Seopyeonje" released in 1993 was an enormous hit, breaking the earlier box-office record Im set himself and opening the chapter of the so-called "audience of a million" era.

A decade later, Im won the prestigious Best Director Award at Cannes Film Festival for "Chihwaseon", the first honor ever bestowed on a Korean filmmaker. The achievement dramatically elevated Im's status in Korea and elsewhere. Im's towering achievement at Cannes also coincided with a growing interest in Asia and elsewhere about Korean cinema and touched off the Korean Wave.

"Chihwaseon" follows the life of Jang Seung-eop, a preeminent but eccentric painter who lived a tumultuous life in the final years of the Joseon period in the late 19th century. "Chihwaseon" marked Im's second appearance at Cannes after his entry with the Korean classic love story "Chunhyang" in 2000.

Im's latest movie incorporates the thematic elements in "Chihwaseon" and "Chunhyang", while broadening the scope of what traditional Korean sensibility and artistic expression mean.

In his early career, Im built his name as a commercial filmmaker who directed several pictures a year, helping to fulfill the quota for domestic pictures set by the government. The first turning point of his career came in 1981 when director Im made "Mandala" and emerged as an art-house cinematographer. Since then, Im has been exploring traditional themes and Korean cultural identity.

"Im unveils 100th film 'Beyond the Years'"
by HanCinema is licensed under a Creative Commons Attribution-Share Alike 3.0 Unported License.
Based on a work from this source