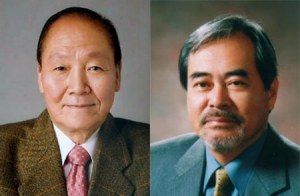 The musical "My Scary Girl" is an adaptation of the film with the same title starring actors Park Yong-woo and Choi Kang-hee.

The romantic horror musical revolves around the relationship between a couple, and its unpredictable and violent yet humorous content is sure to grab the audience's attention throughout the show.

Two unique characters take turns singing and narrating the story. At times, they express the feelings of other characters in the show and add comedy to the show by producing interesting sound effects.

New York-based Kang Kyung-ae, who studied musical theater at NYU, wrote the musical while her fellow NYU alum Will Aronson composed the songs.

Aronson's songs, which are at times deliciously sweet and at other times downright bizarre, work perfectly with the story of the show.

The musical, which premiered earlier this month at the Daegu International Musical Festival, will be staged at the Chungmu Art Hall early next year.

It will also be staged by the Barrington Stage Company as part of its theater lab presentation at the VFW Hall in Pittsfield in the United States from July 10 to 26.