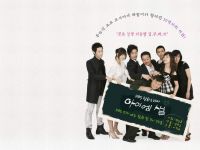 A school is a smaller version of the world, a simulated space and a jungle in which everyone is pursuing different goals. Though sometimes fun and at other times hell, it is undoubtedly a place where we grow up. Like in a society of adults, there are invisible hierarchies, laws and wars in schools, too, but the moment we get rid of them all, we become friends. We come to like people without a particular reason and help others without any preconditions. We also provoke, take risks, and put everything at stake without hesitation. But even after a long time, we vividly remember all those things even though we forget what we had learned from textbooks. People of that time are our everlasting wounds and peers. This drama teaches a whole lot of valuable lessons and reveals a hidden track of our life.

Yang Dong-geun
Chang Yi-san: Timid and unable to say no to others, Yi-san learned early on how to stay in the shadows in order to survive seeing how miserable his family became after his father got fired for participating in a social movement. He didnt plan on getting a job due to his lazy personality, but he decides to take a state exam to grant his fathers longtime wish when his fathers health deteriorates suddenly. His troubles begin when he passes the exam at first try, unable to conceal his smartness, and becomes a teacher. To make things worse, he is appointed to a notorious high school located in a cluster of top-tier schools. He is terrified enough to even look at his students when he receives an order to take charge of a class because he is still single.

Park Min-yeong
Yoo Eun-byeol: Eun-byeol didnt have a chance to receive love from her family because she was raised by her father after her mother died when she was very young. Everybody around her always treated her with compassion, but she was never close with her always-busy father. After she learned that people despised her father, she stopped talking to him. Not because he was a boss of an organized criminal group, but because she hated herself for her pride and stubbornness, which she took after him. One day, she gets into a huge fight at the birthday party of one of her friends. Upset, she buys a pack of cigarettes, which she has never smoked before, and as she is about to begin smoking, a stranger approaches her in an insulting way.

Son Tae-yeong
Shin So-yi: Her cherished memories of nostalgic school years vanished into thin air just two weeks after she began working as a teacher. A school was no longer a place of dreaming, and children were no longer pure-hearted. She is frustrated to see kids having no respect whatsoever for grown-ups, for life and for one another. She even regrets having become a teacher, and shes not confident around guys because her first boyfriend left her for her friend who was full of charm. Her bitter experience made her believe that luck is always on the side of those whose voice is louder and that consideration for others only puts one at a disadvantage.

I Am Sam | Shopping

I Am Sam | Pictures

I Am Sam | Reviews

I Am Sam | Community