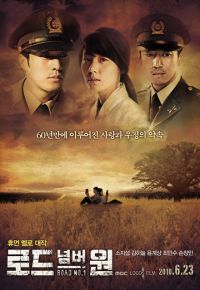 Tae-ho responds
"I'll follow you while your heart is following Kim Soo-yeon"
- A bloody, horrifying battlefield
Two men in love with the same woman but fighting alongside each other for their country. They reluctantly agree to a tense partnership. With the single-minded goal of meeting Soo-yeon in Pyongyang, they throw themselves in combat and pull off a string of victories. Soo-yeon boarded the northbound train to save her brother's life. But before her brother even reaches Pyongyang, he dies and his body is thrown overboard into the sea. Stricken with grief, Soo-yeon finds herself brought to the attention of Shim Woo-seong, a leftist and powerful man.
"We have to be victorious no matter what and reach Pyongyang. We can meet Soo-yeon there if we make it."
Although they have not spoken about their reasons for heading to Pyongyang, both Jang-woo and Tae-ho know what each other's goals are. While they disagree bitterly at times, they also join forces to win battles. Their 2nd company becomes the most successful platoon in the South Korean army. Upon arriving in Pyongyang, Soo-yeon is ordered to become a North Korean agent by Shim Woo-seong. After losing her brother, Soo-yeon is all alone and fights a lonely battle of wills against Shim Woo-seong and his people. Shim Woo-seong has her followed and slowly tightens his grip on her. With little hope left in her life, Soo-yeon focuses all her energy on treating injured soldiers and civilians to maintain her sanity. But she is finally pushed to the edge by Shim Woo-seong and decides to commit suicide. Just then she learns that she is pregnant. It's Jang-woo's baby. So she becomes determined to keep living for the sake of her baby and regains her spirit. She vows to survive, give birth to her baby and be reunited with Jang-woo.
"From this day forward, Captain Lee Jang-woo will lead the 2nd company"
- Amidst a battlefield promotion, the friendship between Jang-woo and Tae-ho remains strong.
Tae-ho must now take orders from Jang-woo and this hurts his sense of self-worth. He becomes bitter that a lowly petty officer who is also in love with his fiancé has become his commanding superior. With their positions reversed, Tae-ho becomes testy and attacks Jang-woo's decisions. He stubbornly refuses to obey him. But every time he disobeys orders, more soldiers in their company die in battle because of him. Tae-ho awaits a severe reprimanding from Jang-woo after his disobedience results in the loss of lives. But Jang-woo unexpectedly doesn't harshly punish Tae-ho. This act of benevolence makes Tae-ho feel worse about what he did. Jang-woo wishes to give Tae-ho a chance to redeem himself. However, Tae-ho keeps causing more trouble for the entire company. While the 2nd company continues to march northward, they are given orders to lock down an important road in Gyeonggi Province. Jang-woo gives orders that they mustn't pursue any retreating enemies who abandon their bunkers. Yet, Tae-ho disobeys the order and leads the 2nd company to chase the fleeing North Korean soldiers, ending up in a trap. More lives are lost. Jang-woo takes out his pistol. He hands it to Tae-ho and tells him to kill himself with it to salvage his honor. In his sorrow and grief, Tae-ho pulls the trigger. But the gun doesn't go off. Jang-woo had removed all the bullets before handing him the pistol.
"Thanks a lot for obeying orders"
Tae-ho hates himself after Jang-woo says those words to him. He crumbles into the depths of despair and defeat. Tae-ho risks his life by attacking enemy forces that have captured Jang-woo, who was escorting wounded soldiers all by himself when he was ambushed. While surrounded by enemies on all sides, Jang-woo and Tae-ho fight their way out of enemy fire and share a profound moment of friendship. They are overwhelmed by the enemy nonetheless and their chances of making it out of enemy lines are nil. But they still have the fight within them and keep struggling to survive. On the brink of death, they recall the happiest moments in their lives. And those moments are filled with fond memories of Soo-yeon. For the first time, they smile while sharing stories about Soo-yeon. They finally find something in common between them.
We both love Soo-yeon for the same reasons.
Soo-yeon was like the mother they both never had while growing up and their hearts belonged to her. They vow to survive. They vow to be reunited with Soo-yeon. Two men in love with one woman. And a friendship that is deeper than any love. Through love and friendship, Jang-woo and Tae-ho miraculously survive and make it back to the 2nd company.
Running across a battlefield with bullets whizzing by, Jang-woo keeps his troops motivated. Tae-ho is at his side, supporting him in every way he can. In the fierce combat, the 2nd company is able to take back control of Youngchon County from the enemy. The 2nd company traces their way to the spot on Route 1 where the bodies of fellow soldiers are buried. As the men stand along the road, Tae-ho discovers the true leadership of Jang-woo. After promising to return to this place and give the fallen soldiers a proper burial, Jang-woo starts digging with tears in his eyes. He gives the dead soldiers a belated military burial. Among the pile of buried weapons, they find the military baton that Captain Yoon Sam-soo once held. Tae-ho presents it to Jang-woo, recognizing him as the true captain of their company. Surviving deadly battles and sharing memories of the woman they both love, Jang-woo and Tae-ho reaffirm the strong friendship that has grown between them. Their next destination is Pyongyang. They march towards Pyongyang.
What will become of the two men when they finally meet Soo-yeon?
And whom will Soo-yeon choose?

Lee Jang-woo(Company commander, Captain) / actor So Ji-sub
"Please stay alive, Soo-yeon. I'll stay alive if you're alive, too."
Born in poverty, his father was a peasant. He starts out as a petty officer but later becomes a captain in battlefield promotions. He is warmhearted, stubborn and strong-willed.
He is also a trusting and warm person. In the battlefield, he has uncanny tactical skills that serve him well in overpowering enemy combatants in any kind of terrain. Leaving his hometown, he becomes a soldier to earn enough money to put Soo-yeon through medical school. Soo-yeon happens to be the daughter of the master he worked for as a servant. While risking his life in the battlefield, he thinks about Soo-yeon all the time.
Experienced in guerilla warfare, he leads his troops to victory and as a reward he is allowed to return to his hometown where he finds out that Soo-yeon is engaged to Tae-ho, and this devastates him. Then the Korean War erupts and he desperately fights alongside Tae-ho, a fellow soldier, friend, and rival, with the hope of seeing Soo-yeon once again.

Shin Tae-ho (Platoon leader, First lieutenant) / Actor Yoon Kye-sang
"I'll follow you while your heart is following Kim Soo-yeon"
An elite officer and graduate of the Army Academy.
He enrolled in the army academy to follow in the footsteps of his father who was an independence fighter. After graduating from the academy, he volunteers to fight at the frontlines in the Korean War. He wishes to become a decorated soldier and defend his country. Immensely proud of himself, he is supremely confident that he will be able to distinguish himself in the war. As a man who lives a principled life, he falls in love with Soo-yeon, a graceful, young woman. But an important secret mission that he leads is bungled because of Soo-yeon and he starts to doubt whether she really loves him.
He is stuck with Jang-woo, his rival suitor for Soo-yeon's love, when they are assigned to the same platoon. They bicker with each other but after fighting many fierce battles together, they develop a deep friendship...

Kim Soo-yeon (Jang-woo's lover, doctor) / actress Kim Ha-neul
"Shoot me ff that will end this battle."
She grew up together with Jang-woo and she's like a sister to him. They later fall in love with each other. Her heart belongs to Jang-woo. One day, she is told that Jang-woo died in the Battle of Mt. Balchi and so she reluctantly gets engaged to Tae-ho, who courted her. She plays a pivotal role in setting in motion a tank attack by the North Korean Army when her brother overhears her conservation with Tae-ho who mentions a preemptive strike on a bridge that is crucial to the North Korean forces. When Jang-woo miraculously returns alive, she hardly gets the chance to welcome him because the civil war erupts on June 25th, the very day of her wedding with Tae-ho. She flees the encroaching army with her family and is reunited with Jang-woo in Busan. But she chooses to head back north because she does not want to abandon her ailing brother. She is a strong woman who is also a tender lover. She is loved by Jang-woo and Tae-ho, who are attracted to her tenderness and warmth.

Oh Jong-ki (Master Sergeant, First Sergeant) / Actor Sohn Chang-min
Although he is a brilliant war tactician, he has a violent personality and uses brutal methods. He brings down the morale of everyone around him. The minute he laid his eyes on Jang-woo, he knew he wouldn?t like him. He doesn?t recognize Jang-woo?s expertise in guerilla warfare and combat skills. He supports platoon leader Tae-ho and undermines Jang-woo whenever he can.

Yoon Sam-soo (Company commander, Captain) / actor Choi Min-soo
He's a brave and patriotic soldier. A soldier's soldier. He mentors Lee Jang-woo and Shin Tae-ho. While leading the 2nd company, he dies in battle. Even after his death, his bravery and leadership are burnished in the memories of Jang-woo and Tae-ho.