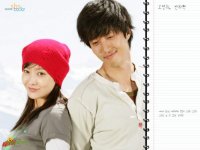 It is spring of the year 1999. At a high school in Gyeongju (an ancient capital located in the southern region of Korea), Dan-hee (Kim Hee-seon) is famous among the guys as an eccentric girl who plays baseball, and Ha-jin (Lee Dong-geon) is renowned as the handsome class president who has overcome his past as an orphan.

On the other hand, Yoo-gang (Yoon Se-ah) is a loner who is ostracized from her peers because of her melancholy character, but her eyes are always on Ha-jin. Years later, in the spring of 2006, Ha-jin comes to Jae-myungs (Lee Jin-wook) rescue when he is in need of help, and the two become best friends. Jae-myung is the son of the President of Mirae Chemicals, and his recommendation lands Ha-jin a job.

The President orders Jae-myung to coach the companys softball team, in hope that it will discipline him. Dan-hee has respected Jae-myung as a baseball player for a long time and has high hopes for his influence as a coach. At first, Jae-myung scoffs at the softball team, having been a baseball player all his life, but begins to find motivation while working with the team through Dan-hees passion and diligence. He sets new goals to transform his team into a champion team and to make Dan-hee into the best pitcher in the game. During this process, he falls in love with her. Dan-hee is also attracted to Jae-myung, but finds it difficult to open up to him after the scar left in her heart by her first love. Jae-myung becomes curious about this man who has hurt Dan-hee so deeply

View all 80 pictures for "Smile Again"