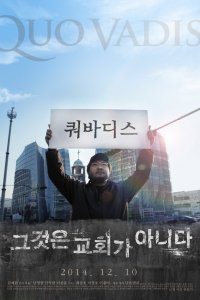 Synopsis
The church is the body of Christ. In Greece, the church embodied a philosophy. Then in Rome, it became an institution. Spreading throughout Europe, it became one with the culture there. Traveling to the US, the church became a business. And when it arrived in Korea, it became a conglomerate. The top five largest churches in the world are located in Korea. However, Christ has long been absent in the nation. So then, what is the church? Who is Jesus Christ? What kind of world do Christians want? If the church is indeed the body of Christ, then we must ask the questions point-blank. Where do we stand in all this? And where exactly are we headed? Korean churchesQuo Vadis? Korean societyQuo Vadis?

View all 10 pictures for "QUO VADIS"