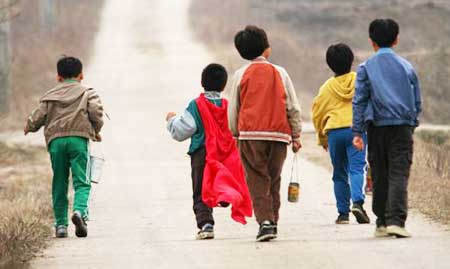 A scene from "Children...", which is based on a true, unsolved case of five boys who were found murdered. / Courtesy of Lotte Entertainment

The difficulty of dramatizing true stories lies in harnessing the facts to creative ends, so that it doesn't stop short of mimicking documentaries.

Lee Kyoo-man's "Children...", based on an unresolved and much emotionally invested murder of five boys, deserves kudos for its delicate approach to adapting the sensitive issue onscreen - and the process is made all the more convincing by its cast of fiendishly talented actors and atmospheric mise-en-scene.

The film's very strengths, however, end up betraying its own cinematic potential. What begins as a speedy and rhythmic psychological drama, complete with dashes of humor and biting social commentary, loses momentum as it trades in too much of its dramatic factors for some lackluster suspense.

In 1991 Daegu, five elementary schoolchildren go missing after setting off in search of salamander. Two years later, these so-called "frog boys" are still nowhere to be found and the case is fading into oblivion - save for the occasional reports that they were abducted by aliens and such - until an ambitious television producer decides to give the case a new spin.

Park Yong-woo shines in his role as Kang, who, disgraced and demoted to the Daegu office for staging parts of his award-winning documentary, takes an interest in the case while searching for a catchy story to restore his glory. During his research he takes notice of a renowned psychology professor Hwang (played by Ryu Seung-ryong, who never disappoints), who suggests that one of the children's parents may be responsible for the crime.

The clues seem to support the controversial theory - two months since the boys go missing, one of the mothers (a marvelously disheveled Kim Yeo-jin) receives a phone call from her son, Jong-ho, but sounds less than enthusiastic in the recorded conversation and "fails" to press a button that would trace the caller's location, while her husband (a genuinely heartbroken Sung Ji-ru) seems bizarrely nervous when the conniving duo pays a visit to their house. Kang jumps right in what seems to be a fast ticket to fame, and decides to test out the professor's claim that the boys are buried beneath Jong-ho's newly cemented bathroom floor.

"Children..." begins with a captivating opening sequence, featuring a red cape belonging to one of the boys flapping gently in the breeze, winged by a poignant musical theme. In his second feature film since the 2007 thriller "Wide Awake", Lee stylishly skips over unnecessary details - "This is a runaway case, not a disappearance", a policeman coldly tells the parents when they report their children, while authorities begin an extensive search after waiting four long months.

Instead of resorting to tragic melodrama about a family's loss or whodunit detective story, the film opts to focus on the nature of human desire and how two career-driven men use the missing boys for their personal ambitions.

After making such a speedy, bold and promising beginning, however, the film begins to falter through its slow, disjointed latter section that gives way to some rather unimpressive thrills and sappy scores.

"Children..." initially succeeds in capturing the dynamics between characters, as expected of a well-orchestrated psychological thriller, but for some reason decides to skip over much of the profound tensions between Kang and Jong-ho's accused father that seem central to the suspense. At one point Kang learns to truly sympathize with the missing children and tries to search for the criminal himself - a transformation that is not entirely convincing.

Sung Dong-il, as a devoted police officer, on the other hand, brings girth and weight to somewhat tame the film's remarkable flaws. Moreover, viewers are not at a complete loss as they are invited to a sleepy rural village and sense firsthand the haunting effects of an event that has altered its fate.

In 2002, the boys' remains were discovered in a nearby forest and autopsy results show that they were murdered. But the statute of limitations expired in 2006, and the case remains unresolved. Knowing this, a chilling sense of loss is bound to pervade long after the credits roll.

In theaters Feb. 17. Distributed by Lotte Entertainment.Two-and-a-half stars out of four.

"Missing 'Children..'. case turns into stilted drama"
by HanCinema is licensed under a Creative Commons Attribution-Share Alike 3.0 Unported License.
Based on a work from this source