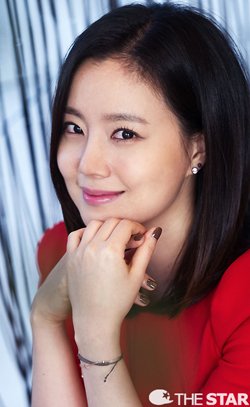 Moon Chae-won has become a familiar face among many Korean households after playing the role of a pediatrician in the recently ended KBS drama "Good Doctor". In the show, she helps train an autistic resident at the hospital and eventually falls in love with him.

Moon has been lucky to star in a number of popular soaps and films, including "The Princess' Man" (2011). Her latest drama also garnered the highest viewer ratings of its time slot, with an average of 17.9 percent. Rather than pointing to her uncanny ability to pick out winning scripts, she said the secret of her success is that she has been blessed to work with good people.

In "Good Doctor", Moon made an extra effort at verisimilitude by paying attention to even the smallest of details regarding her appearance. She opted for minimal makeup and short fingernails, and even ignored her mother's advice to accentuate her cheekbones using makeup because she thought a real doctor would be too busy to bother with that.

The drama explored the theme of what it takes to make a good doctor. "In the drama, I said 'A good person is probably a good doctor'. The same might be true for actors. I'll likely continue to keep asking myself, 'what makes a good actor?'" she said.

"I'm not the type of person who can completely forget myself and identify with every character I play. Even if I take on a totally new role, past characters are still there inside me", she said.

Six years after making her acting debut, she said she wants to slow down her workload and focus on quality rather than quantity in terms of artistic output from now on.