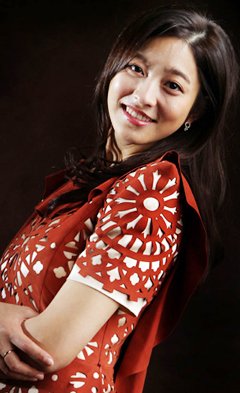 Actress Park Se-young may look cold and unapproachable from afar, but she quickly opens up and shows her warm personality as she strikes up conversation.

The 24-year-old newcomer resumed her acting career last year by appearing in several TV soaps. Recently she drew attention for her role in the SBS drama "Faith". She is now starring as a nerdy student in the new KBS drama "School 2013", which began airing early this week.

"I feel like I'm growing as an actress as I'm building my career through TV appearances little by little", she said.

She has picked up the sobriquet of "Indian Princess" for her exotic looks. Park made her acting debut in a TV drama in 2002 when she was still a child, but left showbusiness to concentrate on her studies. She has returned to acting with renewed vigor after she was contacted by her old agency, she said.

"I just had this vague daydream of becoming an actress since I was in elementary school", she said, "Then out of the blue I got a phone call from an agency I worked with when I was a child, and it led me back into this world". She is currently studying film and media studies at Sangmyung University.

"I'd rather be remembered for the characters I play than anything else", she said. "I hope I get the chance to show my versatility with a range of roles in the future as I've only just started out".