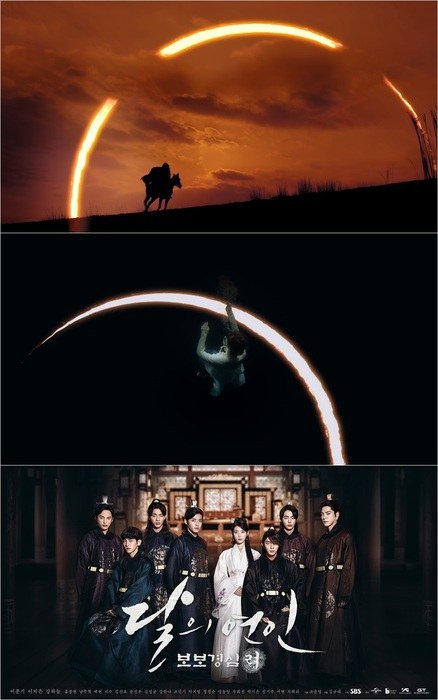 Lee Joon-gi and IU are coming together magically through the moon.

Sources of the new SBS drama "Scarlet Heart: Ryeo" released a poster of the two main characters who come together through the total eclipse of the sun.

"Scarlet Heart: Ryeo" is about the romance between a 21st century girl who turns into a girl from the Koryeo times and an emperor who hides his warm heart. Lee Joon-gi take on these roles and they meet in the Koryeo times.

An eclipse is an astronomical phenomenon which the moon hides the sun and it's been used an element to symbolize important events of ceremonies. In the American drama "Heroes", the eclipse is the source of the creation of mutants. And in Steven King's movie, it plays an important part in the turn of events.

The total eclipse that occurs in "Scarlet Heart: Ryeo" is when from the earth's point of view, the size of the sun and the moon are identical and completely covers the sun. This phenomenon happens once in every 18 months on earth. Based on a specific location, this phenomenon happens every 370 years.

Therefore, the total eclipse in "Scarlet Heart: Ryeo" is the door to the Koryeo times and foreshadows the unique and mythical love story between Wang So and Hae Soo.

Meanwhile, "Scarlet Heart: Ryeo" is a trendy romantic drama about an emperor and a girl who returns to the ancient Koryeo times. The first episode can be seen on the 29th of August.

""Scarlet Heart: Ryeo" Lee Joon-gi and IU's destined first encounter "
by HanCinema is licensed under a Creative Commons Attribution-Share Alike 3.0 Unported License.
Based on a work from this source