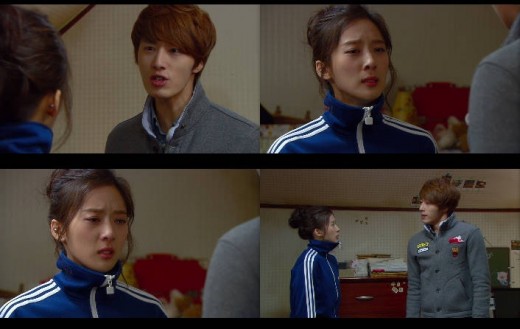 Yang Eun-bi (Lee Chung-ah) was confused at the appearance of her ex-boyfriend, who had dumped her in the past.

Her heart weakened when he said, "Start over with me. I regret dumping you everyday". She listens to a memorable song and thinks of the first kiss she had.

That made Chi-soo (Jung Il-woo) mad. As a condition of pretending to be her boyfriend in front of her ex, he also wanted her to be with him whenever he asked.

As she ignored his calls at the thought of her ex, he exploded. He said harsh words like, "Is your resolve weakening? Are you insane? After what he's done to you?" and such.

"[Spoiler] "Flower Boy Ramyun Shop" Jung Il-woo gets angry at Lee Chung-ah"
by HanCinema is licensed under a Creative Commons Attribution-Share Alike 3.0 Unported License.
Based on a work from this source