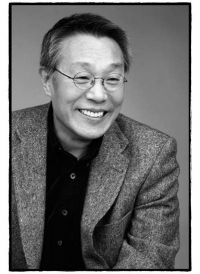 Hwang's novel "The Piper" (Der Gast), which was translated and published in Germany, is receiving a favorable response from the local media. The novel, jointly translated by three writers, was published late last year by famed German publishing house Deutscher Taschenbuch Verlag (dtv). DTV also inked Hwang's previous works "The Old Garden" and "Han's Chronicle". On why the story used the motif of the Korean shamanistic ritual "gut", Hwang said his intent was to ease the banality of the frequently used material of a divided Korea.

Many German media outlets including Detschland Radio, NDR (North German Broadcasting) and newspapers have introduced the book. The media interest is also helping its sales. Hugendubel, Frankfurt's biggest bookstore, displayed "The Piper" at the front of its store.

Hwang Seok-young can be considered the avant-garde of Korean literature. He has always pushed the limit and crossed boundaries. As his 1993 controversial visit to North Korea illustrates, his political and literary passion brought about geopolitical repercussions by expanding Korean literature, which had mostly been limited south of the inter-Korean border. Hwang has been the most active writer in altering the Korean literary landscape.

Hwang is famous for his eloquent outspokenness in literary circles. He would mesmerize foreign diplomats in Seoul with hours-long stories of his writing career. Those who hadn't known of Hwang's reputation were thoroughly entertained at his stories and engaged in sincere discussions about the Korean literary world.

Hwang's literary achievement in the 1970s and '80s particularly shined. He made his impressive debut with a novel and play that were both lauded at a major domestic daily's spring literary contest. His first creative collection "Away from Home" in 1974 instantly earned him the title of a lead realism writer. Novels such as "Away from Home", "Han's Chronicle" and "The Road to Sampo" from the collection are still regarded as the apex of literary realism. That same year, he launched the series "Jang Gil-san" in the Hankook Ilbo daily, an exceptional feat for a novice writer. The series, which continued for ten years, is considered the best historical novel written since national independence. The series, whose main character was a chivalrous Joseon-era thief, provided a break from the oppressive social mood of the 70s and 80s. Hwang's affection for the laypeople as shown in "Away from Home" and "Jang Gil-san" is also exemplified in his real life.

During the country's early modern era, Hwang worked at a factory and did odd jobs. He was also a cultural activist and the first farmers' activist in the post-Korea War era. Mingling with the public, he was part of the May 1980 Gwangju resistance against the authoritarian regime and led progressive cultural movements throughout the 80s. In 1989, as part of a unification campaign, he visited North Korea and held talks with its now deceased leader Kim Il-sung several times. He later published a travelogue of his Pyongyang visit "People Lived There" even while the publisher was arrested. After wandering about Germany and the U.S., Hwang returned to Korea in 1993 and he was immediately arrested on arrival.

In addition to his brazen talk, his singing and people skills are also known to be outstanding. Serving behind bars, his nickname was 'prison chief'. He befriended fellow inmates and even the prison guards with his glib talk and gregarious nature. But perfectionism and a meticulous nature characterize another side of Hwang. Before using the computer to write, he would waste hundreds of pages of paper to produce one page he considered worthy of publication.

The Orient Express in the European Literary Circle

His stay in Europe and his sufferings as an international migrant created the image of Hwang as a member of the literary avant-garde. In Europe, Hwang is referred to as the "Orient Express". Major German, British and French dailies have carried intensive reviews of his works. At the 2005 Frankfurt Book Fair in which Korea was the guest of honor, Hwang was the most specially regarded Korean writer. He resided near Frankfurt throughout the festival period and consequently developed ties with major European publishers. Due to all these combined factors, Hwang's works gained enough attention overseas to have "Jang Gil-san" (1985) published in China, "Away from Home" (1986) and "Shadow of Weapons" (1989) in Japan, and "Hwang Seok-young's Novel Collection" (1988) in Taiwan.

Meanwhile at home, his series "Baridegi", appearing on the The Hankyoreh daily, has gained popularity. The story is about a girl named 'Bari' who escapes North Korea because of acute famine and settles in London. The series began in January and will wrap around mid-June, after which it will be published as a book. In the format of traditional Korean storytelling, the fictional work will touch on key global concerns including North Korea's food shortage, migration of the international workforce, terrorism and imperialist invasions. Book deals with foreign publishers have already been signed, demonstrating keen interest in his latest work at home and abroad. Some even expect 'Baridegi' to replace "Shadow of Weapons" or "The Piper" as Hwang's number one masterpiece.