Three dramas starting, who will be the 'goddess of victory'? 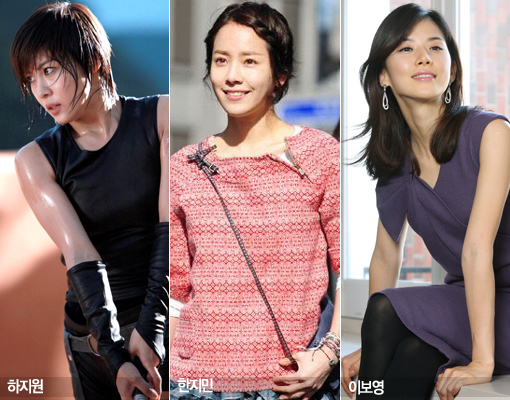 This is second round of Wednesday/Thursdays dramas appearing this year. In the ring are Ha Ji-won, Han Ji-min and Lee Bo-young.

These three are the leading ladies of the three ground wave dramas: MBC's "The King 2 Hearts", SBS's "The Rooftop Prince" and KBS 2TVs' "The Equator Man", all starting on the 14th of March.

In the first round of 2012 drama battle, Han Ga-in from MBC drama "The Sun and the Moon" is in the lead ahead of Lee Si-young from KBS 2TV's "Wild Romance" and Ku Hye-sun from SBS's "Take Care of Us, Captain". Who will continue Han Ga-in's reign and win the second round in March?

"The King 2 Hearts" is a drama about the love between a North Korean sergeant and a South Korean prince under the fictional premise of a constitutional monarchy.

Ha Ji-won will attempt action once again and she is better at at than any male. She has also been practicing the North Korean dialect to blend into her character better.

Another highlight of this drama is that her main co-star will be Lee Seung-gi.

Han Ji-min, from the JTBC drama "Padam Padam... The Sound of His and Her Heartbeats", is going to develop a romance with Park Yoo-chun from the group JYJ.

The role of Park Ha that she has landed herself in the SBS drama "The Rooftop Prince" is random and bubbly like never seen before. This drama is about the unrequited love suffered by prince named Lee Gak 300 years ago, and his time travels into the 21st century. As comical as it is, Han Ji-min's character transformation is required to make this drama work.

Her management AM Entertainment said, "Although she is the bright and cheerful type, she's never played that kind of role, so this time she'll be playing a character close to her own".

In the weekend drama "Hooray for Love" she was a divorcee who was abandoned by her husband. Now she is a happy woman who is loved at the same time by two men. She landed herself the role of Ji-won, luxury hotel VIP banquet manager, in the drama "Equator Man", wherein she is loved by Uhm Tae-woong and Lee Joon-hyuk.

"The Equator Man" is also known as the male version of "Women in the Sun" from 2008. Leading male characters Uhm Tae-woong and Lee Joon-hyuk face each other for a woman they both love.

"Three dramas starting, who will be the 'goddess of victory'?"
by HanCinema is licensed under a Creative Commons Attribution-Share Alike 3.0 Unported License.
Based on a work from this source