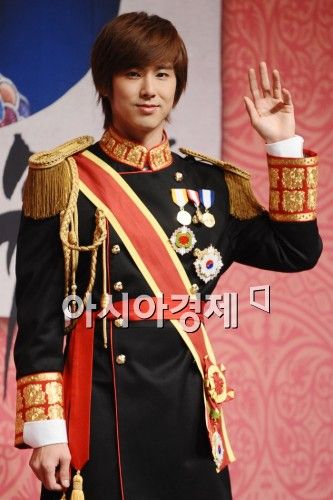 Korean singer and actor Yunho Yunho of boy band TVXQ promoted his TV series "No Limit" in Japan over the weekend, visiting the country for the first time since TVXQ halted its musical activities there last April.

The singer attended a fan event to celebrate the DVD launch of MBC TV series "No Limit", held at Tokyo International Forum on June 26.

According to local media reports, Yunho Yunho appeared healthy and happy to see some 10,000 fans who showed up at the event.

"Long time no see, I am glad to see you and thank you for coming", the singer was quoted as saying.

In a letter to fans, the singer also shared his feelings about making an acting debut in "No Limit" earlier this year.

"It was my first acting challenge so I was not completely satisfied", explained Yunho Yunho. "But I want to keep try working hard, based on what I learned from doing this drama".

The singer thanked his fans by saying, "I will work hard to show you great performances.. I believe we will meet again".

Yunho Yunho, whose real name is Jung Yunho, made his debut in 2004 as the leader of five-member boy band which became one of the most phenomenal K-pop acts in Asia and reportedly has the largest fanbase in the world.

They have enjoyed great success in the Japanese music industry in particular, topping the Oricon singles charts six times and placing their single and album simultaneously within the top three slots of Oricon's singles and albums chart, the first time for a foreign artist to do so in 15 years.

However, TVXQ have announced that they will no longer be working as a group due to the legal dispute between three of its members -- Kim Jae-joong, Park Yoo-chun and Xiah Junsu -- and agency SM Entertainment.

The three have since formed a new group while Yunho Yunho and Changmin Lee Changmin have ventured into acting.

Yunho Yunho was recently cast as the male lead in the musical "Goong", based on the popular comics and hit TV series "Princess Hours". The musical will premiere in Korea in September.

"Yunho Yunho promotes "No Limit" DVD in Japan"
by HanCinema is licensed under a Creative Commons Attribution-Share Alike 3.0 Unported License.
Based on a work from this source