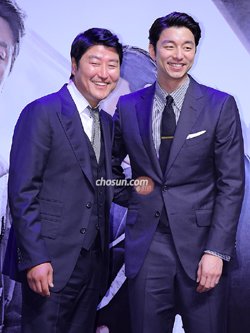 The zombie flick "Train to Busan" is set to reach the 10 million viewer mark, having drawn 9.25 million moviegoers as of Wednesday.

Actor Gong Yoo shared his feelings about achieving the milestone at a press event for his new film, "The Age of Shadows", directed by Kim Jee-woon, in Seoul on Thursday.

"I feel rather calm, as opposed to being excited, because I never expected it", he said.

It remains to be seen whether "The Age of Shadows" will also be a hit. The film, which co-stars Song Kang-ho, tells the story of a group of fighters resisting Japanese colonial rule in the 1930s.

The film will hit local theaters next month.

"Zombie Flick Set to Exceed 10 Million Viewers"
by HanCinema is licensed under a Creative Commons Attribution-Share Alike 3.0 Unported License.
Based on a work from this source