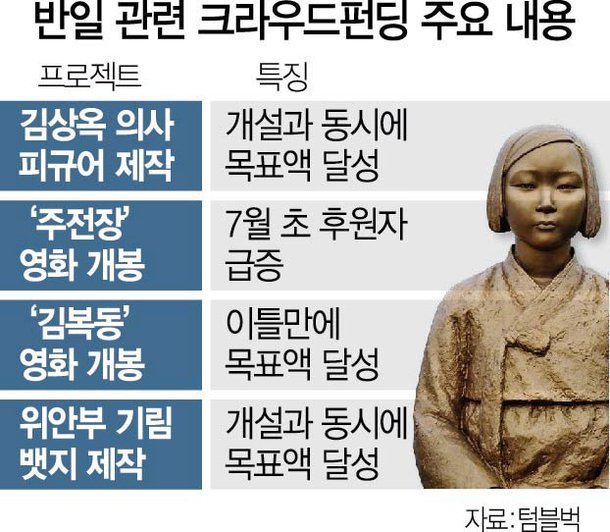 An office worker in his 20s invested 30,000 won into crowd funding for the release of the documentary film "Shusenjo: The Main Battleground of the Comfort Women Issue". It occurred to him that he did not know much about the history in the midst of the recent conflict between Japan and Korea. This person known as A said, "The crowd funding was successful and I could watch the movie. It was a meaningful time, recalling the Japanese government's recent attempt to return to militarism".

Opposing the Japanese government's regulations on export to Korea, there has been a vast increase in consumers who open their wallets dedicated to promoting the history of Japanese military sexual slavery and other anti-Japanese history. According to industry sources, crowd funding projects related to anti-Japanese activities that started collecting money since early this month, when the boycott of Japanese products began to take place, have exceeded the target amounts. Crowd funding refers to the gathering of ordinary people to support activities. If the company succeeds in collecting the target amount, it will either provide the product to participants or return it to stocks after listing.

For projects related to anti-Japanese activities, it was notable that movies were screened after raising the cost of distribution and marketing through crowd funding. The movie "My name is KIM Bok-dong" started crowd funding on the 16th and collected a total of 10 million won in just two days. It tells the story of Lady Kim Bok-dong, a victim of Japanese military sexual slavery, and her 27-year struggle to get a proper apology from the Japanese until she passed away in January this year. The participation of actors Jung Woo-sung and Kim Eui-sung influenced the movie as well, but the fact that ordinary citizens actively participated in the anti-Japanese movement was also cited as a reason for the successful fundraising.

The documentary film "Shusenjo: The Main Battleground of the Comfort Women Issue", which deals with the Japanese military sexual slavery problem that refuted the assertion by the Japanese right wing, also reached the targeted amount of 30 million won. The funding started in May, but things accelerated at the beginning of this month, when the boycott of Japanese products began. The project to make the figure of a Korean independence fighter during the Japanese empire called "I Am Legend" reached the target amount of 2.5 million won as soon as it was open. The movement to create a figure of patriot Kim Sang-ok, who threw bombs at the Jongno Police Station that suppressed independence fighters, was successful in just two hours after funding began.

Industry sources say that smart consumption is also leading to an active participation in the boycott of Japanese products. A crowd funding platform, Tumblbug official said, "There have been many people who have observed the problems we've had with the Japanese regarding Dokdo and the comfort women way before the anti-Japanese movement began. In line with the recent rise in anti-Japanese sentiment, related projects are rapidly exceeding their target amount". The fact that a small amount of money can be used to make meaningful consumption is also considered to have affected the situation. 400 people out of all those who participated in crowd funding "My name is KIM Bok-dong", paid up to 10,000 and 20,000 won.

"Consumers Open Wallets to Anti-Japanese Content, 'Patriotic Investment' is Picking Up"
by HanCinema is licensed under a Creative Commons Attribution-Share Alike 3.0 Unported License.
Based on a work from this source