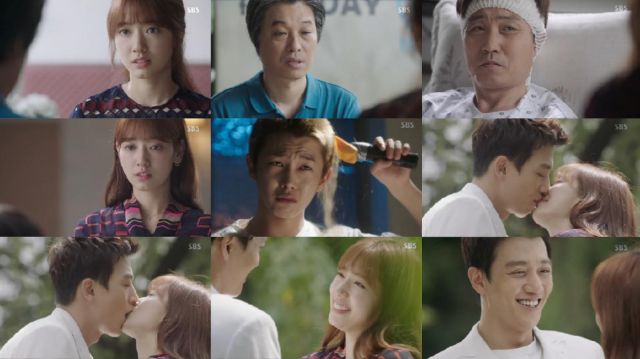 Myeong-hoon (played by Uhm Hyo-sup) has been the main antagonist of "Doctors". His character has been so thinly drawn I've never seen much point in discussing him, although in this, the final episode, I don't really have much choice. Practically the entire runtime is dedicated to Myeong-hoon getting sick and having to beg for forgiveness from Hye-jeong, not for any tangible reason, but because being at death's door Myeong-hoon's mood has taken a turn for the repentant.

It may be stating the obvious but I really, really...just don't get "Doctors". Ever since Hye-jeong became a doctor herself, it's never been clear to me what this drama has been going for. The discussion of medical ethics has been horribly superficial. Hye-jeong's general vindictive streak, her main obvious flaw post-timeskip, ended up never being addressed. And now pretty much all the catharsis is on the redemption of a character who until now has been a pretty one-dimensional villain.

One obvious purpose of the drama has been the romance between Hye-jeong and Ji-hong, which for the most part has been defined by a lack of meaningful conflict. Ji-hong is just this unambiguously perfect boyfriend with no apparent flaws, who appears to be fairly transparently dedicated to helping Hye-jeong just for the sake of true love. Ji-hong's only contribution to the story have been to pop up every so often with a magical solution to hitherto unsolved problems.

The closest we get to a negative look at Ji-hong's personality is when he decided (ultimately correctly), that the surgery on a comatose pregnant woman was too risky and could not be medically justified. That plotline resolves here, and it's curious how the sense of ambiguity and loss which have never really been portrayed in the main plot actually comes through pretty strong here. There are no miracles, no last-minute absolution- just the sad realization that what we have now is all we have now.

I suppose in the end I should be grateful, at least, that Hye-jeong does reconcile with her father, although like so much of the plot in "Doctors" I don't find this development all that satisfying because I'm not sure how the characters got there. Really, there's kind of a weird parallel between Myeong-hoon and Min-ho- they're both terrible fathers who should be forgiven simply for being fathers, rather than because of a change in situation. There may be worse life lessons to close a drama out on- but all the same I was ultimately fairly disappointed by "Doctors".