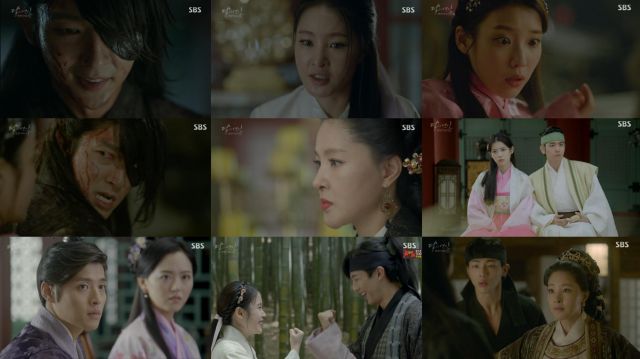 Empress Yoon (played by Park Ji-young) is the closest thing Prince So has to a parental figure. Unlucky for him, she's a huge jerk. After his murderous rampage last episode I never thought I'd feel sorry for Prince So but, well, this episode does a surprisingly good job humanizing the guy. We can see that his generally vile behavior is, twisted though it may seem, really just a desperate if inevitably doomed to fail effort on his part to gain some level of normal emotional satisfaction.

This works to make the first rumblings of a bond between Prince So and Soo surprisingly sympathetic. Yes, Soo, does have this fantastically bad habit of throwing herself into suicidal situations, but when it comes to Prince So, the effort is actually appreciated. Prince So doesn't really need a princess so much as he needs a friend to woman up and tell him that murderous rage is not the solution to all of life's problems, even when the targets deserve it.

Unfortunately Soo's tendency towards butting in on other people's business, in any other context, just makes her look like an idiot. Take Princess Yeon-hwa (played by Kang Han-na). She's a jerk on a power trip. This isn't some unique Goryeo personality trait. Plenty of people in modern Korea and everywhere else will gladly take any excuse to abuse an underling. This is a fairly universal problem and being a martyr really isn't a good response.

The only reason Soo hasn't already died multiple times over is because the royal princes can always be relied on to rescue her in a pinch. While it's nice that Soo is rewarded for her heroism by being given heroism in turn, she's severely lacking in more human personality traits. Soo's confrontation of Prince So at the beginning of the episode is effective because her response to Prince So's pain is such a stark contrast to Empress Yoon's. Soo only just got here, but Empress Yoon has known Prince So for his whole life.

Contrast the later fight scene, where a bunch of random mooks pop out of nowhere for the sake of vaguely defined revenge. That whole sequence is just abominably silly, to the point it's embarrassing to watch. To date the royal intrigues of "Scarlet Heart: Ryeo" have been immensely interesting, but as of yet the drama hasn't done anything interesting with the time travel. Beautiful as the palace scenes may be, they can only do so much.