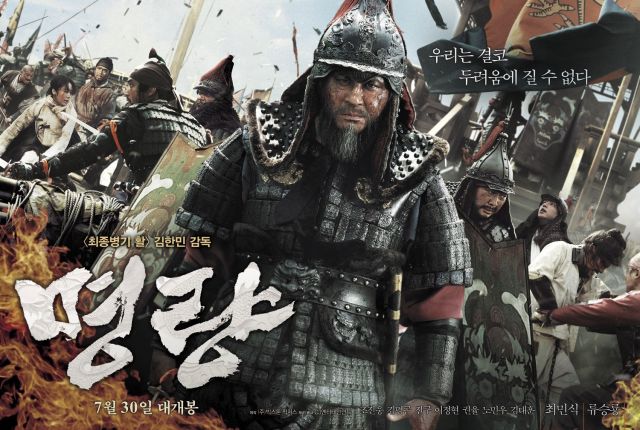 Admiral Yi Sun-shin (played by Choi Min-sik) has a reputation as one of the greatest tactical geniuses in world history, a fact recognized even by his contemporaries. Consequently, his portrayal in "The Admiral: Roaring Currents" may initially come off as a bit of a shock. Far from the all-powerful Übermensch who single-handedly saves the world, Yi Sun-shin lacks confidence, charisma, or even much in the way of political support. He just stubbornly adheres to the most strategically sound plan even as troop morale is hopelessly plummeting.

While "The Admiral: Roaring Currents" has the obvious trappings of a patriotic story about Korea's darkest hour, director Kim Han-min wisely decides to instead focus on fear. The film focuses so much on the imminent threat of inevitable doom and death that it practically qualifies as a horror movie. This is typified via the terrifying enemy commander Gurujima (played by Ryu Seung-ryong), who makes a point of dressing in intimidating traditional armor and using psychological warfare against the hapless Koreans.

Gurujima makes for a fascinating counterpoint to Yi Sun-shin, because where Yi Sun-shin appears weak and lacking in the characteristics important to the great men of history, Gurujima oozes them. And Gurujima isn't incompetent either- it just becomes clear as the film wears on that tactical considerations are more important in practical real life situations than bravado. Yi Sun-shin is the absolute epitome of hyper-competence, even as this gains him no glory and appears to be driving the man to an early grave, simply by how old he looks. At multiple points Yi Sun-shin practically admits that he really has no good reason to fight outside of sheer inertia.

It's against this backdrop that we finally arrive at the epic setpiece of the battle itself- and I do mean epic. The naval battles scenes here are brutal and incredible- the relatively slow pace of the ship's movements aptly drums up the fear, amplifying the film's main overriding theme of fear. And when those giant hits start connecting, it's clear that this is a cruel, dirty, vicious battle in earnest where even accidents can result in horrifically disfiguring injuries.

And there's Yi Sun-shin- always staying the course. Most significantly, though, he is always in the line of danger, however much his subordinates try (or not) to protect him. Yi Sun-shin becomes a legend here, not due to his courage but rather his unwillingness to succumb to fear. The film wisely recognizes that this strategy only works if Yi Sun-shin himself is the one facing physical and mental destruction, such that when the tide of battle finally turns-

Well, that much I'm not willing to ruin. "The Admiral: Roaring Currents" is an amazing piece of work, building the perfect synthesis of heroic persona and nightmarish battle, leading to a truly epic conflagaration that doesn't celebrate war so much as it does the feeling that the things in life really worth fighting for, we'll go after them even in the darkest hour when animal survival instincts feel a lot more natural. There's sheer terror in the presentation that can't be bought with a high budget, although goodness knows the film sure knows how to use its special effects.